Puget Sound Institute Visiting Scholar Nicole Faghin writes that by 2050, the United States will likely exceed 400 million people, more than half of whom “are projected to be living in coastal counties.” In this article, Faghin looks ahead to next March’s National Working Waterfronts and Waterways Symposium in Tacoma, and discusses some of the issues that face our increasingly urban coastlines and waterways.

Since Superstorm Sandy ravaged the mid-Atlantic coast, coastal communities across the nation have begun taking a fresh look at shoreline issues: Should devastated areas be redeveloped? If so, how? What are the best uses for waterfront land?

Often overlooked in these conversations is the trend of diminishing working waterfronts. Many commercial activities vital to coastal communities — boat building, fishing, recreational boating, aquaculture and other marine-dependent activities — could simply not exist without shoreline access.

This issue and many others will be addressed in March 2013 when Tacoma, Wash., hosts the third National Working Waterfronts and Waterways Symposium. Participants can join the discussion about preserving working waterfronts and share ideas with policy-makers, tribal members, port operators, commercial fishers, tourism experts, business people, planners and property owners from across the country.

Across the United States, shoreline-dependent industries, governmental agencies, tribes and the public struggle to resolve their competing interests in and conflicts over access to shorelines, waterways and waterfronts. In the years to come, these challenges will only increase. By 2050, the population of the United States is expected to exceed 400 million people, and more than half are projected to be living in coastal counties.

In 2007, Maine Sea Grant documented some of these impacts in collaboration with the national network of Sea Grant and Coastal Zone Management programs across the U.S. They surveyed experts nationwide to characterize the scope and effect of waterfront and waterway access issues on communities and compile an inventory of solutions and tools being implemented.

The resulting report, Access to the Waterfront: Issues and Solutions across the Nation — http://www.seagrant.umaine.edu/files/pdf-global/07access.pdf — demonstrated that coastal communities from Alaska and Hawaii to the Great Lakes to the Gulf and Atlantic coasts face similar challenges in their quests to preserve access to shorelines.

As a follow-up to the report, a consortium of interested parties convened the first national symposium on waterfront access in Norfolk, Va., in 2007.  More than 150 people assembled to discuss issues and challenges faced by a broad range of interest groups. The symposium findings recognized a number of specific strategies employed by communities and states to improve and secure waterfront access, including land-use research, economic diversification, taxation policies, comprehensive planning, grants, public investment and loans.

At a second symposium in 2010 in Portland, Maine, more that 220 participants discussed the need to form an education and research entity to increase the capacity of coastal communities to make informed decisions, balance diverse uses and plan for the future of their working waterfronts and waterways. Other key strategies included:

The Third National Working Waterfront and Waterways Symposium is scheduled for March 25-28, 2013, in Tacoma, a dynamic waterfront city on South Puget Sound with a strong track record in waterfront economic development, public engagement and concurrent waterway restoration and environmental stewardship. 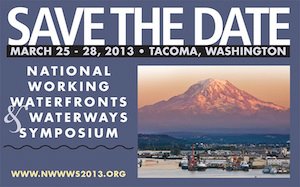 The symposium will build upon the results and interests from the first two and bring the conversation to the West Coast. In contrast to parts of New England or Florida, for example, the Northwest claims a robust maritime economy and complex commercial fishing industry. But waterfronts face similar challenges, whether the conversation takes place in Gloucester, Mass., or Tacoma, Wash.

Following the 2010 symposium in Maine, team members secured a grant from the federal government to continue network development. The U.S. Economic Development Administration funded a year-and-a-half study to identify strategies, practical methods and finance mechanisms to address current economic challenges and maintain the economic resilience and diversity of coastal communities. The project is a collaborative effort among the Island Institute; the Maine, Virginia and Florida Sea Grant college programs; the National Sea Grant Law Center; the Urban Harbors Institute; and Coastal Enterprises Inc.

The final results from this study will be presented during the Tacoma symposium.

Nichol Faghin is a Coastal Management Specialist at Washington Sea Grant, and is a Visiting Scholar at the Puget Sound Institute.