Puget Sound science owes a debt to the researchers and explorers who got there first. We profile some of these important figures in an occasional series we call Puget Sound Voices. 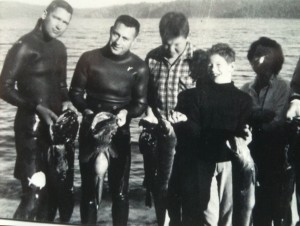 Vern Morgas (second from the left) and friends

Prior to the 1940s, if you wanted to explore the waters beneath Puget Sound, you might have used a Jules Verne-style diving suit, complete with giant helmet and air tubes. Either that or you held your breath.

All that changed when Jacques Cousteau co-developed the Aqua-Lung and ushered in the age of modern scuba. Divers began exploring marine waters worldwide, and it wasn’t long before a few intrepid souls began venturing into Puget Sound. Vern Morgas of Shelton, Washington is 87 years old and was one of the very first.

He did it without much fanfare. His recollection was that the water was a little murky in Hammersley Inlet where he made his first dives in the early 1950s, but that the spearfishing was good. “I didn’t think of it as being a pioneer,” he says. “To me, it was just so much fun.”

Morgas learned to scuba dive in California after World War Two and bought his first air tank and regulator directly from Cousteau himself. After his inaugural dives in Puget Sound, he became a scuba instructor and eventually taught and certified more than 2,000 divers.

Over the past 60 years, Morgas has seen plenty of change in Puget Sound. His recollection is that while some things were better in the past— he remembers Hood Canal as a fisherman’s paradise— some things, at least, may have improved. Consider what some people used to call whale watching. “In the early days I can remember when the Orcas would swim up [near here],” he recalls. “I’d hear the rifle shots of dimwits shooting at them. Right out here. And this inlet at this point is a mile wide, and they’re shooting at Orcas. Hard to believe.”

Hear excerpts from an interview with Vern Morgas (as well as some of his excellent harmonica playing) as part of the Puget Sound Voices series.