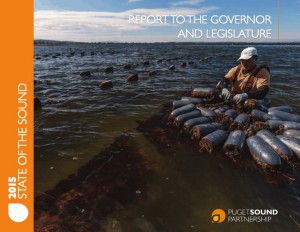 Overall, funding has fallen far short of critical needs, the report argues. Projects described in the state’s recovery plan as ‘Near Term Actions’, would have required $875 million to carry out during the years 2014 – 2015, but as of last June had received only $67 million. The period from 2012-2013 had a shortfall of 57%.

The State of the Sound also describes a lack of significant progress on several key areas of focus for state and federal recovery efforts. The agency tracks a series of ‘Vital Signs’ such as numbers of orcas or fluctuations in herring populations—there are 21 vital signs in all—as indicators of Puget Sound health. “The majority of Vital Sign indicators are, at best, only slowly changing. Few are at—or even within reach of—their 2014 interim targets,” reads the report.

Some vital signs have seen modest improvement, however. The Partnership says that in 2014 removal of shoreline armoring such as seawalls and bulkheads exceeded permits for new armoring structures. Goals for habitat restoration also made some steps forward.

The State of the Sound report includes a series of funding recommendations ranging from continuation of existing allocations to support of legislation that would direct additional funds to key areas like habitats, stormwater and restoration of shellfish beds.