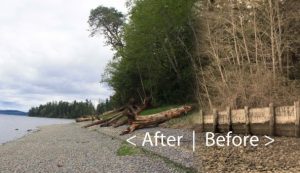 Can we really wait 700 years to remove all of the armoring along Puget Sound’s shoreline? Let’s do some of the math.

Senior Writer Christopher Dunagan reports in Salish Sea Currents this week that armor removal now exceeds new creation by somewhat less than a mile per year. At first glance, that’s a good thing. It is a reversal in a 100-year trend that has added more than 700 miles of bulkheads and other anti-erosion structures to Puget Sound beaches. It happened for the first time in modern memory in 2014 and the trend continued in 2015. But consider that number: 700 miles.

In the simplest terms, less than a mile per year of net removal adds up to a timeline of more than 700 years. That doesn’t tell the whole story, of course. The fact is, not all of the region’s shoreline armoring is meant to be removed, nor should it be. Some of it is considered necessary. No one is expecting to breach the downtown seawall, or surrender endangered houses to the waves. But it does give a sense of the scale of the project.

Recent peer-reviewed studies show that armoring clearly and unambiguously causes damage to the ecosystem, giving increasing urgency to the need to remove it wherever possible. Just how much of it is vital and how much can stand to be removed or replaced with more environmentally sensitive structures is not yet clear, but what is clear is that 700 miles of it — more than 25% of Puget Sound’s shoreline — is hurting the environment. Put another way, 700 miles adds up to a ‘Great Wall’ stretching further than the ocean-facing coasts of Washington and Oregon combined. It’s going to have an impact.

So why not just get rid of it? That’s easier said than done. For example, between 2012 and 2016 the state of Washington, with support from the EPA, spent about $8 million dollars on seven armor removal projects. They were just some of the many such projects underway across the region, but were bundled together as part of a series of grants from the state’s Marine and Nearshore Grant Program [also a funder of some of the work at the Puget Sound Institute]. Those projects did more than just remove concrete bulkheads. They restored beaches and in some cases added new ‘softshore’ structures that took the place of more damaging ones. But simply measured by linear feet, total armoring removal in those projects added up to less than a mile. It is clear that it will be difficult and expensive for state and federal agencies to simply engineer their way out of the problem, and those agencies recognize that other strategies have to be considered as well.

One approach is to look at where most of the armoring is occurring. Studies show that about 57% of Puget Sound’s shoreline is privately owned, and that is where the state believes much of the change will happen. State-sponsored efforts such as Shore Friendly provide information to shoreline owners and building contractors on alternatives to armoring. The state is also looking at ways to ramp up enforcement against un-permitted, illegal shoreline armoring. Removal numbers may be modest so far, but the hope is that once the roller coaster crests the hill, it will start to roll faster down the other side.