In a turnabout that offers hope for Puget Sound’s nearshore ecosystem, old bulkheads are now being removed faster than new bulkheads are being constructed, according to permit figures provided by the Washington Department of Fish and Wildlife.

In fact, officials with Puget Sound Partnership recently announced that the agency’s 2020 goal for reducing shoreline armoring had been reached — just barely — by the end of last year. Specifically, the goal, or target, was to remove more bulkheads, seawalls and other armoring (measured in length) than what was added from 2011 to 2020. One caveat: Not all armoring projects were captured in the permit data.

Now that we’re past 2020, new targets are in the works along with new Vital Signs and indicators of ecosystem health. Last year, 13 revised Vital Signs along with 34 indicators were approved by the Puget Sound Leadership Council, as recommended by staffers. The Leadership Council oversees the Puget Sound Partnership, the agency responsible for coordinating dozens of public and private partners in the recovery of Puget Sound. Reporting on the new indicators is expected to begin early next year.

Targets, which will define goals for future ecosystem improvements, are currently being developed for a few of the revised indicators and should be available before the end of the year, according to a timetable set by the Leadership Council. Work on other targets will continue through next year.

As for all the old indicators and targets, a final report on progress, or lack of such, over the past 10 years will be a major part of the biennial State of the Sound report, scheduled for submission to the governor next week. The document reports on every target with a discussion about the factors that have led to current conditions.

Many experts were surprised that overall shoreline armoring was reduced enough to meet the 2020 target, given that new construction outpaced removal for five of the past 10 years, based on permit data. In fact, from 2011 to 2013, nearly 2.5 miles of new bulkhead construction was matched with barely a mile of removal. But public efforts eventually kicked in to encourage and fund bulkhead removal while discouraging new construction. Last year, total removal reached 0.71 mile, compared to only 0.18 mile of new bulkheads that were built. (Details can be seen by hovering your curser over bars in the chart.)

Among the concerns with shoreline armoring, experts point out that bulkheads often occupy areas of the beach used by forage fish, which are important food for salmon. Hard seawalls also can reduce natural erosion and concentrate wave energy, leading to a beach devoid of sands and gravels, which forage fish use for spawning. Check out article on effects and ongoing coverage of shoreline issues in the Encyclopedia of Puget Sound.

Bulkhead replacement, rather than removal, still dominates shoreline construction, according to the permit data. Some 1.31 miles of armoring was replaced last year. That’s nearly 50 percent more than the total amount that was removed combined with new construction. Thankfully, experts say, an undetermined amount of that replacement work involved taking out hard vertical bulkheads made of logs, rocks or concrete and replacing them with a more natural “soft shore” design. Such soft-shore construction involves reducing erosion by sloping the beach and placing individual logs and boulders in strategic locations to attenuate the wave energy.

In April, the Washington Legislature passed a law that requires shoreline owners who wish to replace a bulkhead to consider designs that reduce erosion with the least impact to the natural environment. The law went into effect in July, and the Department of Fish and Wildlife intends to involve the public in drafting rules to carry out the new law along with a separate law meant to streamline permitting for habitat-improvement projects.

The long-term goal is to replace hard bulkheads with more natural systems capable of better protecting the environment without allowing damage to shoreline houses and other structures. Where homes are built close to shore on small lots, bulkheads may be the only feasible solution, especially in areas where the sea level is rising dramatically due to climate change. Sea-level rise varies from place to place, even within Puget Sound, depending on long-term ground movement. Waterfront owners are beginning to confront these issues, as described in articles in the Encyclopedia of Puget Sound.

In total from 2011 to 2020, the Department of Fish and Wildlife permitted the removal of 4.85 miles of shoreline armor while allowing 4.71 miles of new construction. Although that meets the target and calls for a celebration, WDFW officials are quick to point out that about 715 miles of shoreline remains hardened, so that a variety of habitat problems remain unaddressed.

These numbers also do not account for unknown shoreline modifications built illegally without permits. Such illegal construction and other compliance issues are now getting increased attention from WDFW.

As new laws and regulations come into effect, the Department of Fish and Wildlife has created a new Compliance Division to make sure people have adequate technical assistance for their projects and that they follow all legal requirements.

Four new compliance inspectors have been hired, three with state funds and a fourth with federal funding to focus on the Stillaguamish watershed in North Puget Sound. The Stillaguamish inspections are a special focus of the Pacific Salmon Treaty with Canada, because fishing in both countries has been limited by the low natural returns of salmon to the watershed.

Training for the first compliance inspectors is nearing completion, and they are expected to be in the field in early November. Their responsibilities involve working with property owners and checking on construction in both streams and saltwater shorelines. They will work in conjunction with local habitat biologists (the WDFW officials who sign off on hydraulic project approvals), as well as with uniformed enforcement officers from the agency.

Some new authorities for WDFW came out of recommendations to the Legislature by the Southern Resident Killer Whale Task Force (PDF 2.9 mb). In 2019, lawmakers strengthened civil penalties for violations of the state’s Hydraulics Code and related permits, thus moving the agency away from criminal citations for shoreline violations. The Legislature also allowed new permits to require mitigation for habitat damage caused by shoreline construction. 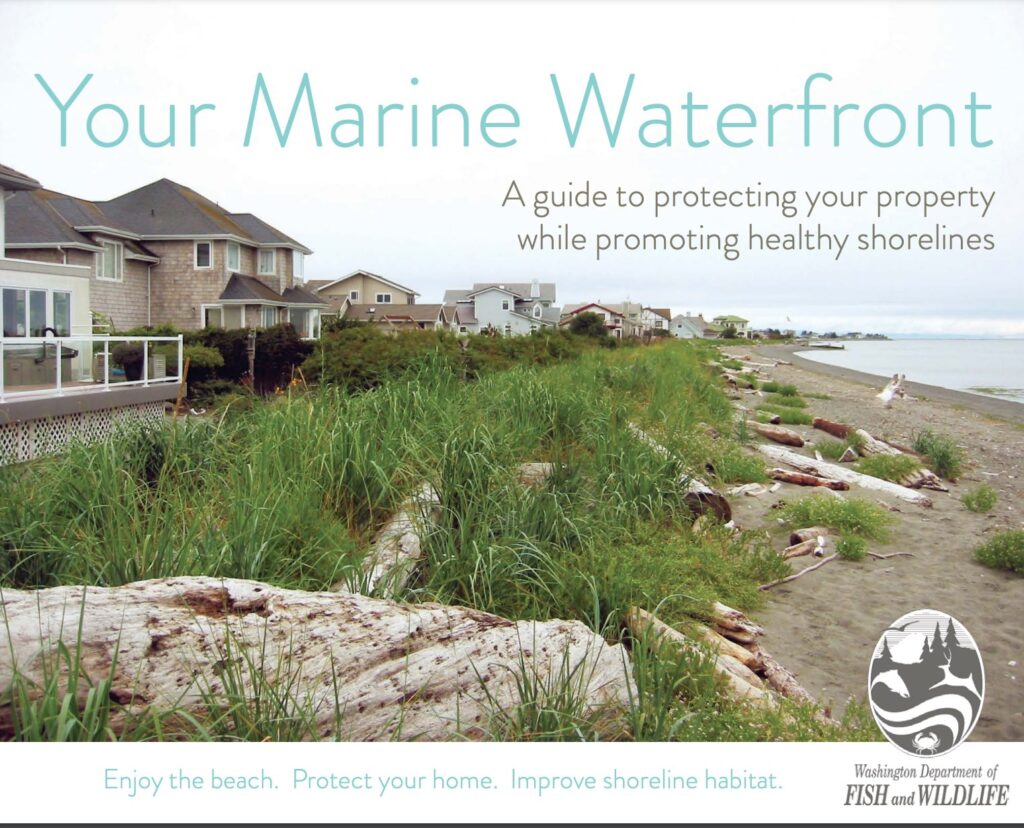 This year, other changes were made to require that replacement bulkheads, as well as new bulkheads, be designed to cause the least damage to the shoreline environment. The favored option is to remove a failing bulkhead and restore the beach to a more natural condition. If a shoreline structure is needed, natural (“soft”) materials are preferred over solid retaining walls. When solid walls are necessary, they should be located upland of the existing bulkhead wherever possible.

To help shoreline owners understand their options, experts have created a technical document called “Marine Shoreline Design Guidelines” along with a less technical booklet called “Your Marine Waterfront” (PDF 12.2 mb). Another change this year is to allow a streamlined process for habitat-recovery projects. A pilot program is getting underway to establish a revised permitting process for habitat improvements.

Randi Thurston, who is managing the new Compliance Division, said the incoming compliance inspectors, supported with the increased legal authorities, will provide “boots on the ground” when it comes to checking on permitted projects, investigating reported violations and launching patrols to locate and take action against construction done without permits.

At the same time, the Legislature has built upon the success of an older pilot program that provides financial and technical support to property owners who wish to remove shoreline armoring or work on other habitat-improvement projects. Originally developed in 2014 with federal funding, the Shore Friendly grant program continues to work at the local level throughout Puget Sound, operating through six county-based organizations along with the Northwest Straits Foundation, which serves six counties. 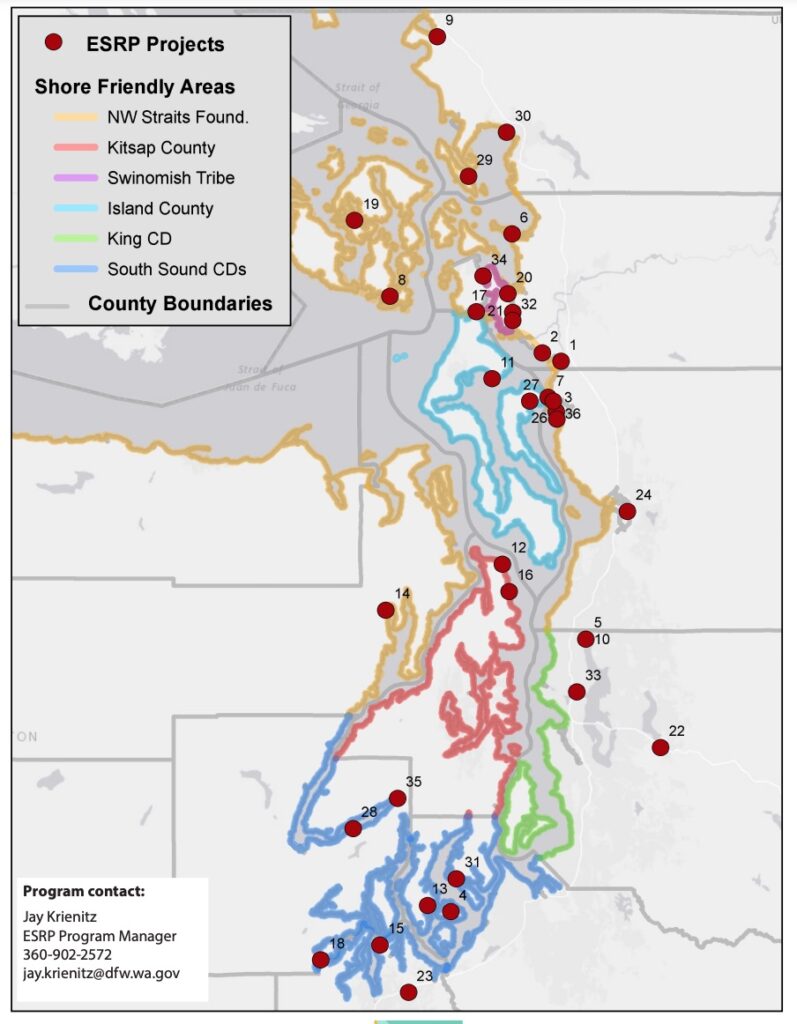 
As the old indicators and their 2020 targets are phased out, new indicators are being designed to better describe ecosystem conditions. For that reason, the shoreline-armoring indicator — which measures construction and removal of bulkheads rather than habitat condition — has been removed from the list of future indicators.

The old indicator — net change in permitted shoreline armoring — may still be reported as a so-called intermediate measure of progress, but other habitat measures will be used to describe changes in shoreline conditions, according to Nathalie Hamel, who heads up Puget Sound Partnership’s Vital Signs reporting program.

It is important to understand that state permits don’t capture all shoreline construction taking place, Nathalie told me. In addition, the “replacement” of shoreline armoring can represent a wide variety of habitat changes, all lumped into one category. For example, replacement of a concrete wall with the right type of “soft shore” protection could bring a major habitat improvement. But if one concrete wall is replaced with another, the result could be no improvement at all. For these reasons, the measure of armoring construction, removal and replacement should be modified in some ways if it is to be retained, Nathalie said.

Despite the measure’s shortcomings and the newly approved indicators, reduction in shoreline armoring is still considered an important goal. That’s one reason that strategies to reduce armoring were retained in an updated Shoreline Armoring Implementation Strategy (with links), completed this past July.

The revised indicators (PDF 131 kb) of shoreline habitat, now listed as a Vital Sign called “beaches and marine vegetation,” still include an indicator for the total area of eelgrass in nearshore habitats. New indicators include:

While these conditions are generally measured as part of an agency’s ongoing work, some refinements are needed to report numbers and trends. Also, definitions of “functional condition” and “site status” may need to be clarified.

Other indicators that could be helpful in describing habitat conditions but still needing considerably more work include:

(Drift cells, by the way, refer to sections of a shoreline where sands and gravels move naturally in the same direction.)

At the larger scale, the revision of Vital Signs has retained six Vital Signs that report on biophysical measurements: birds, estuaries, freshwater, marine water, orcas, and toxics in aquatic life.

Just as “shoreline armoring” was converted to a Vital Sign called “beaches and marine vegetation,” the Vital Sign for “land development and cover” was converted to “forests and wetlands.” New indicators were added for every Vital Sign, as described in an 87-page report titled “Revisions to Puget Sound Vital Signs and Indicators” (PDF 11.9 mb).

Since human-related Vital Signs and indicators were developed after extensive studies before the latest update, no immediate changes were proposed to the Vital Signs for the statutory goals of “Healthy Human Population” and “Vibrant Human Quality of Life.”