VIEW THE FULLY FORMATTED NEWSLETTER in your browser

Low-oxygen problems to be scrutinized in talks about research, modeling efforts

For decades, researchers have been advancing their understanding of what causes the harmful and sometimes deadly low-oxygen problems afflicting some areas of Puget Sound. A series of 10 workshops on the subject will begin Tuesday, July 26th, and continue into next year. The workshops, coordinated by the Puget Sound Institute, will build on previous discussions, such as the Washington Department of Ecology’s Nutrient Forum and a forthcoming Marine Water Quality Implementation Strategy that will help focus actions for Puget Sound restoration.
Read more in the PSI blog. 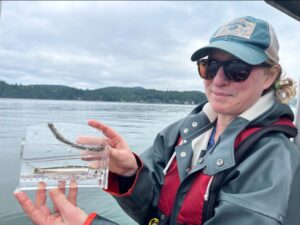 In recent years, scientists have found clear links between the removal of shoreline armoring and the health of beaches and intertidal habitats. Fewer studies have looked at the potential benefits to the subtidal zone further off shore. That prompted a team of researchers, including the Puget Sound Institute’s Tessa Francis (pictured above), to undertake a two-year study of subtidal fish abundance near armor removal projects in Puget Sound. Francis is lead author of a resulting paper published this year in the journal Restoration Ecology.

In the paper, the group describes the abundance of juvenile Chinook and chum salmon and forage fish such as Pacific herring along armored, restored, and reference (undeveloped) shorelines. They found that while Pacific herring were more abundant along reference sites, shoreline restoration and shoreline structure were not important predictors of salmon abundance. The authors write, “Importantly, the lack of a positive association between restored shorelines and fish abundance in our findings may reflect a mismatch between the spatial and/or temporal scales of the restoration projects and the scale at which fish population abundance is measurably affected.” Francis and collaborators are continuing their work by expanding the spatial and temporal scale of their sampling.
Read the full paper (open access). 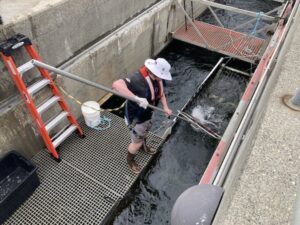 Earlier this month, our roving videographer Sylvia Kantor spotted workers from the Washington Department of Fish and Wildlife and the Muckleshoot Tribe pulling sockeye from the Ballard Locks fish ladder. They were planning to haul the salmon to the Cedar River hatchery where the fish could deposit their eggs. Wildlife officials say that because of warmer temperatures, sockeye that spend too much time in Lake Washington are getting diseases and many are dying. Trucking the fish to the hatchery bypasses the lake and may protect the already diminished Lake Washington/Cedar River sockeye run.
Watch the video on our Instagram page.

Our research affiliate Kathy Peter is co-author of a paper this month in the journal Analytical and Bioanalytical Chemistry. The paper discusses promising approaches for assessing the method performance of non-targeted analysis using high-resolution mass spectrometry. The authors write that “improved performance assessments will enable accurate communication and effective utilization of NTA results by stakeholders.”

The Puget Sound Institute’s Andy James is co-author of a paper in the journal Resources, Environment and Sustainability looking at the impact of residual wastewater contaminants on soil microorganisms. The study examined soil microbial communities from tree groves that had been irrigated with treated wastewater. The authors found that there were some impacts from wastewater contaminants on rhizosphere microbial communities, “though the impacts of increased soil moisture due to irrigation and the effects of exposure to residual contaminants are difficult to separate,” suggesting the need for further studies.