Questions about where salmon go and how they survive when traveling far out into the Pacific Ocean have puzzled scientists for 200 years. But a new vision for piecing together this intricate puzzle has begun to emerge, thanks to sophisticated research tools deployed during an international expedition this past winter.

Last week, scientists got together in Vancouver, British Columbia, to share their preliminary findings and to brainstorm the next steps in a collaborative effort to solve some of the great mysteries of Pacific salmon. Researchers from multiple countries provided wide-ranging expertise aboard five research vessels during the two-month-long Pan-Pacific Winter High Seas Expedition.

Determining the factors that allow some salmon to live but others to die is an exciting challenge, said Laurie Weitkamp, a research fish biologist for NOAA’s Northwest Fisheries Science Center.

“When salmon leave coastal areas and head out into the high seas, they more or less enter a black box,” said Laurie, who helped lead the U.S. research team aboard the 209-foot Bell M. Shimada. “We don’t really understand where they are, what they are doing, how much prey is available to them, or their predators, etc.”

The research ships from the U.S., Canada and Russia covered nearly 1 million square miles in the eastern and central portions of the North Pacific from February into April. They gathered detailed information about ocean conditions and the many creatures found on the high seas — from plankton to porpoises. Multiple tissue samples were collected from more than 2,300 individual salmonids — sockeye, chum, coho, pink and chinook salmon, along with steelhead trout. The task of analyzing the samples has begun, but it’s a big job.

Thanks to previous genetic studies and catalogs of genetic markers, every fish caught during the expedition can be traced back to its home stream. Researchers also collected traces of DNA from the water itself to detect the presence of salmon and many other marine species. This approach is called “environmental DNA” or eDNA for short.

These genetic techniques, which use advanced sequencing equipment, can yield far more data with less effort than old-fashioned methods of implanting coded-wire tags in the fish with the hope that they will be caught later for identification.

Based on historical tagging data from the 1960s and ‘70s, researchers have developed a general, large-scale understanding about where various species of salmon from different places tend to gather in the wide-open ocean. But where a specific population, or stock, goes and how it responds to temperature and other environmental conditions may be uniquely programmed into the genes of that stock, Laurie said.

By knowing how specific stocks are affected by ocean conditions before the salmon return to spawn could help enormously with salmon management — including where fishing should and should not take place, she noted.

Among the major questions being pursued by researchers: What are the various salmon eating in different places? What species competes with them for food? And what are the species that, in turn, want to eat them? Such questions become more urgent as ocean conditions change dramatically and salmon returns become more unpredictable, in large part because of global warming.

Although the data are still being analyzed, Laurie says researchers observed an apparent lack of large predators surrounding the oceanic salmon. Even eDNA samples failed to reveal many salmon-eating sharks, marine mammals or even predatory fish. That stands in contrast to the inland waters of the Salish Sea, where marine mammals, birds and fish all consume salmon. Those observations raise the idea that a greater threat to salmon in the ocean may be a lack of food — because of low plankton production, competition from other species, or both.

Winter conditions exacerbate the food supply, because less sunlight means less plankton growth, while winds and waves mix the waters, making the prey harder to find and catch. The winter is also rough on researchers, even when a large ship is available. That’s one reason why an expedition like the one earlier this year has never been done before.

In the North Pacific, this year’s research expedition built upon smaller expeditions in 2019 and 2020, allowing year-to-year comparisons under varying ocean conditions — including warmer waters in 2019 than in successive years. The expeditions were conceived by Dick Beamish, a longtime Canadian salmon researcher, who enlisted the help of Brian Riddell of the Pacific Salmon Foundation to raise funds and develop the project.

This year’s oceangoing effort was originally planned for last year but was postponed because of issues surrounding COVID-19. Had the final expedition taken place last year, the researchers would have had more time to analyze the data and may have had additional findings to present during last week’s symposium, Laurie said. But one important outcome was a strong vision for collaboration, including a greater ability to share usable data among scientists — even those from other countries, including the U.S., Canada, Japan, South Korea, Russia and others. (See FAIR principles.)

Laurie anticipates that some of the best scientific reports will consider data from all the ships taking part in all three expeditions. Some of the first results, she said, will likely involve maps of where various species were found, along with any patterns or relationships gleaned from the data. The symposium, she said, served as a “teaser” for potential findings that researchers are likely to announce in the coming months and years.

While the reasons for an abundance of some salmon species and a scarcity of others must be fully explored, general findings from this year’s expedition reflect conditions that salmon managers and fishers were seeing along the coast and back into the streams. Record runs of sockeye from Bristol Bay, Alaska, (PDF 197 kb) were observed in the catch numbers reported by expedition ships — particularly the Russian ship Tinro, which operated south of the Aleutian Islands in the western part of the study area (see diagram).

One explanation offered for the boom in sockeye is a warming of the lakes, where sockeye spend an early stage of life. Warmer temperatures produce more algae to build the food web from the bottom up.

Meanwhile, coho numbers caught by the research fleet were down this year compared to the previous years. That may be explained in part because less fishing this year took place at night, when the majority of coho are caught, Laurie said. That’s where eDNA may help fill in the blanks.

As in 2019, a fair number of “skinny” chum were caught, which is indicative of problems in the food supply. Chum from all over, including Asia, spend their summers in the Bering Sea and then move into the Gulf of Alaska for the winter. “Something happened in the Bering Sea,” Laurie said, adding that researchers are studying the ocean ecology to try and come up with answers.

It seemed that salmon were responding to temperature this year, as in previous years, Laurie said. Sockeye like the coldest water, while coho and pink salmon like a bit warmer temperatures. The question is whether the salmon are responding to the difference in temperature or simply following their prey, which may be affected by temperature. Understanding what they are eating, as revealed by data already collected and under review, could provide pieces to the puzzle.

Getting to the answer of food consumption and energy supply for the salmon involves a variety of techniques used during the expedition — from simply sampling stomach contents to measuring the ratio of stable isotopes in their tissues, which can reveal the type of food they are eating. The percentages of fat and protein help describe the nutritional state of the fish, from healthy to starving. 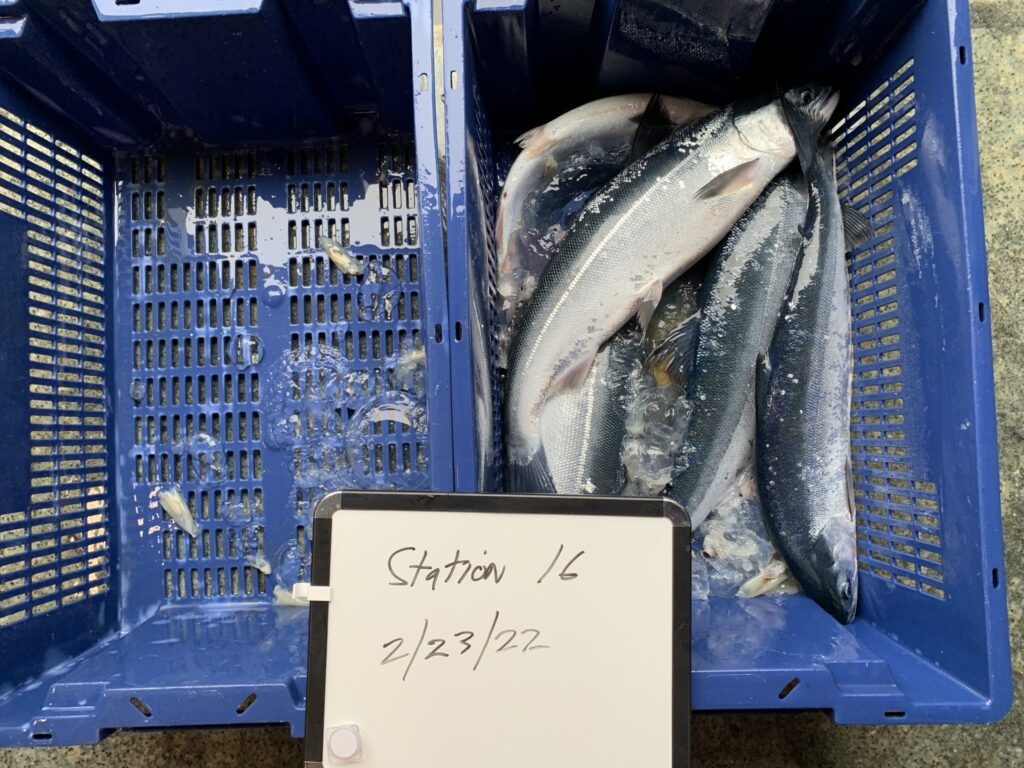 Measured levels of fat and protein during the winter of 2019 suggest that chum salmon were in moderate condition, whereas coho, pink and sockeye were in poor condition but not starving, according to preliminary findings by researchers at NOAA’s Auke Bay Laboratories in Southeast Alaska. Information from the latest expedition should help provide insight into the fitness of salmon during this critical winter period, they said.

With regard to isotopes, the data showed that krill appeared to be the dominant pathway from phytoplankton to salmon in the northwest Gulf of Alaska,, according to preliminary results reported by Genyffer Troina of the Canadian Institute for the Oceans and Fisheries. Similar isotopic signatures suggest possible competition between chum and sockeye salmon, along with squid and lanternfish. On the other hand, in the southeast Gulf of Alaska, salmon appeared to consume a greater variety of prey, with only pink salmon competing with squid and lanternfish.

The ships deployed different types of plankton nets to understand which of the tiny organisms are available in each sampling area.

Another technique was to examine the blood of salmon for a hormone called insulin-like growth factor, or IGF, which is produced in the liver to stimulate cell division and growth. IGF tends to reflect the past two weeks of activity. High levels mean the salmon are growing rapidly, a factor in their fitness, survival and reproduction. Laurie, who is involved in the IGF studies, says data from all three expeditions will be analyzed and compared with other nutritional findings.

To help align new and historical data, Canadian researchers fished with a gillnet from the Raw Spirit while following the other Canadian ship, the CCGS Sir John Franklin, which fished with trawl gear. Trawling was the primary method of fishing used by recent expedition ships, whereas historical data was collected largely with gillnets, which operate closer to the surface. It turns out that catches with the two types of gear was similar — with one major exception. None of the ships caught steelhead except for the gillnet. It was an important demonstration, clearly revealing that steelhead swim near the surface even far out in the ocean, as they are known to do in inland waters.

Researchers at the symposium generally agreed that international collaboration and ongoing research in the ocean are essential to keep up with a changing environment and develop a reasonable response. One step in the process has already begun with a project called BECI, Basin Scale Events to Coastal Impacts, proposed by the North Pacific Anadromous Fish Commission and the North Pacific Marine Science Organization. The idea was endorsed last year by the United Nations as part of the Decade of Ocean Science and Sustainable Development. A series of workshops has been held, and a longterm plan is now under development. 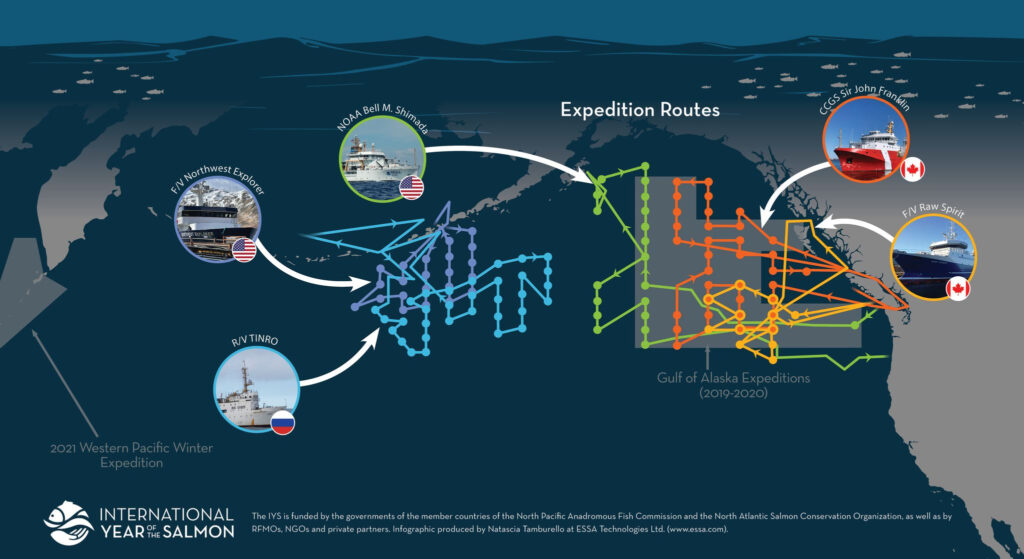