Strategies to keep steelhead fishing alive while restoring steelhead populations to rivers in Puget Sound are spelled out in the “Quicksilver Portfolio” (PDF 2.3 mb), a document unveiled today before the Washington Fish and Wildlife Commission.

After three years of study, the Puget Sound Steelhead Advisory Group announced that it was ready to solicit public and political support for an experimental approach that includes monitoring the effects of fishing and increased hatchery production as part of a steelhead-recovery effort.

“Together, we can conserve wild steelhead, restore fishing opportunities, provide economic benefits to our communities and create a future in which the rich tradition of steelhead fishing is continued and passed on to future generations,” states a memo from the group (pdf 127 kb), consisting mostly of steelhead anglers.

Some of the major ideas include:

Andy Marks, a member of the advisory group, said it might seem problematic that those who want to fish for steelhead are the ones leading the way to save them. But there is nobody more passionate about steelhead than a steelheader, he said. Furthermore, steelhead are not harvested commercially under state law, he noted.

It is important, Andy said, that his children and grandchildren be able to fish for steelhead, or at least to know them. “My biggest fear,” he added, “is that one of my grandkids will climb up on my lap and ask me what a steelhead was. That is a very real possibility.”

“At one time, rivers, streams, and estuaries along the shores of Puget Sound teemed each year with steelhead returning from the Pacific Ocean to their natal spawning grounds,” states the “ESA Recovery Plan for Puget Sound Steelhead,” which was issued by NMFS in December. “These runs played an integral role in the lives of Indian tribes that lived in the region, as well as for many of the people who settled in the area.”

In recent years, the steelhead population has declined to about 6 percent of its historical size, and nothing done so far has reversed the downward trend toward extinction.

Strategies outlined in the federal recovery plan address each of the major problems outlined, yet hatchery production is not mentioned as a solution. On the other hand, the 2008 Statewide Steelhead Management Plan does incorporate hatchery operations as a recovery strategy — provided that hatcheries are operated from an “ecosystem perspective” with careful monitoring to measure the outcome. 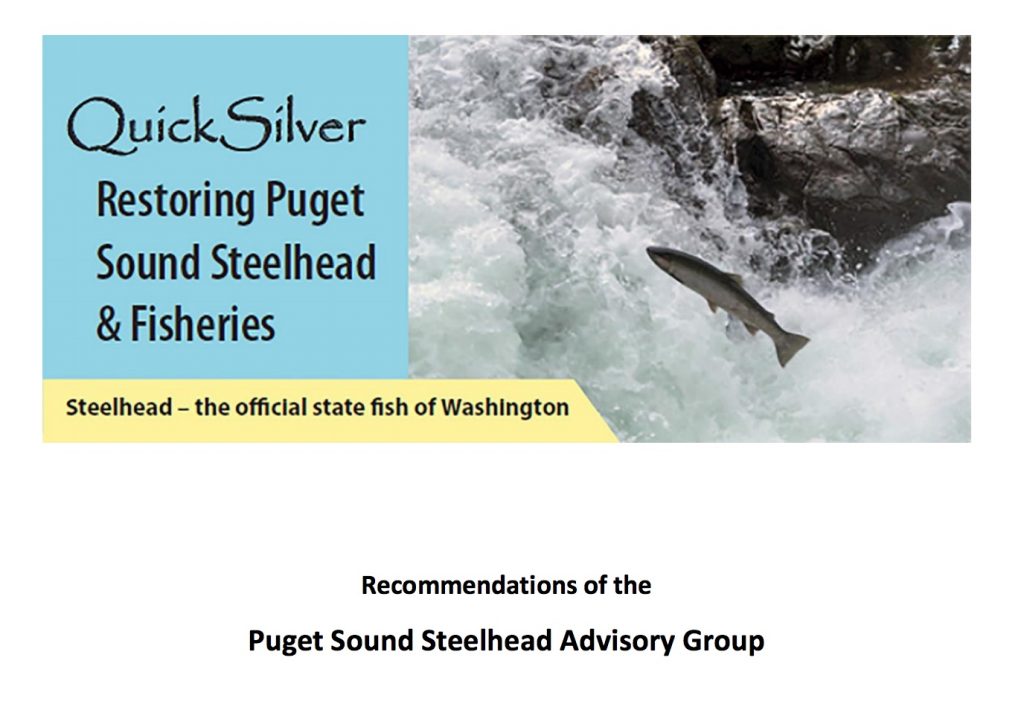 Andy Marks said the committee covered all relevant issues, from scientific to regulatory. “I know more about steelhead genetics that I ever wanted to know in my life,” he said. Members believe that that their “QuickSilver Portfolio” does not conflict with the federal steelhead recovery plan nor any other official plan dealing with steelhead.

Essential to the effort is scientifically credible monitoring to ensure that the effort is helping and not hurting the steelhead population, he stressed. Volunteers can be expected to assist state biologists in the effort, and the work can get started with few changes to the budget for the Washington Department of Fish and Wildlife, which manages steelhead.

Fish and Wildlife Commissioner Jim Anderson of Buckley in Pierce County observed that today’s presentation by the group included nothing about Puget Sound tribes, which are legally “co-managers” of the salmon and steelhead resource.

Marks responded that the strategies will be reviewed by the congressionally established Hatchery Scientific Review Group, of which the tribes are a part. Also, projects for specific streams must be approved by tribes in that area. Since the strategies are designed to be compliant with existing approved plans, he expects minimal conflict as each idea undergoes further scrutiny from scientists, policymakers, budget officials and the Legislature.

Commissioner David Graybill of Leavenworth said he would like to move forward on the proposal.

“We are looking for you, the creators of this document, to recommend a pathway forward,” he said. “I’m very eager to see some guidance on where we can start as a result of the hard work you have done.”

The Fish and Wildlife Commission agreed to further discussions about how to engage the broader public and other interests in the plan. Left hanging is the question of whether the steelhead proposal requires a motion of support from the commission, a change in policy by the department, or some other action.

Meanwhile, one member of the Puget Sound Steelhead Advisory Group does not agree with the concept as presented to the commission and is writing a “minority report” to argue against the plan. I will link to that report here when it becomes available.

Jamie Glasgow of Wild Fish Conservancy said the state needs to fulfill its earlier commitments of properly managing existing hatcheries before embarking on a new hatchery program. So far, a lack of funding has kept state biologists from collecting the data needed to show whether existing hatchery and fishery programs are complying with established objectives.

“Now is not the time to experiment with hatcheries to increase fishing pressure,” Jamie told me in an email. “The state’s ongoing shortcomings on understanding and managing hatchery impacts on wild fish recovery are also evident in the review of hatchery reform science (a document issued in January of this year).”

Jamie, whose organization has sued the state over steelhead hatchery operations, detailed his concerns in a letter to fellow members of the Puget Sound Steelhead Advisory Group before the report was completed. His letter concluded, “As an advisor, my advice is, let’s get it right with the steelhead hatcheries we’ve got before adding more… I believe that when more recreational fishers are reliant on the health of wild steelhead populations to provide the privilege of angling, WDFW will then be more motivated to find the will and the resources to more fully benefit wild steelhead recovery for sustainable fisheries.”

The text was changed from its previous version to recognize that segregated hatcheries allow anglers to take home their catch.