As state, tribal and federal salmon managers work together to establish this year’s fishing seasons, they have not forgotten about the needs of Puget Sound’s endangered killer whales.

In fact, new documents related to the southern resident orcas describe an investigation looking to find ways to reduce fisheries at certain times and locations that might get the whales more food. And yet it appears that nobody has figured out a way to help the whales by reducing salmon fishing.

Annual negotiations to establish seasons and quotas for commercial, tribal and sport fishing are now underway in what is called North of Falcon process, so named because it involves fisheries north of Cape Falcon in Oregon.

The killer whales are on everyone’s mind “in every step throughout the North of Falcon process,” said Carrie McCausland, spokesperson for the Washington Department of Fish and Wildlife. The salmon managers are fully aware that NOAA’s National Marine Fisheries Service will scrutinize fishing proposals to protect threatened and endangered species, including the whales, she added.

This year, the managers have a new “risk assessment” report (PDF 3.4 mb) that analyzes how fisheries may be reducing the number of salmon available to the whales along the coast and in Puget Sound. The report, considered part of interagency “consultation” under the Endangered Species Act, focuses mostly on Chinook salmon — the primary prey of the southern residents.

The analysis, conducted by 20 experts (mostly fisheries biologists), examined statistical relationships between the abundance of salmon at certain times and in general locations and how that corresponds to the well-being of the whales, as measured by their survival, birth rates and body fitness.

The statistical analysis is complex, but the overall picture came out as expected: When salmon are more plentiful over all, survival and birth rates tended to increase, with some lag time factored in. But when salmon were less plentiful, fitness of the animals declined, as measured by the observation of “peanut head,” which is caused by a loss of blubber near the blowhole. 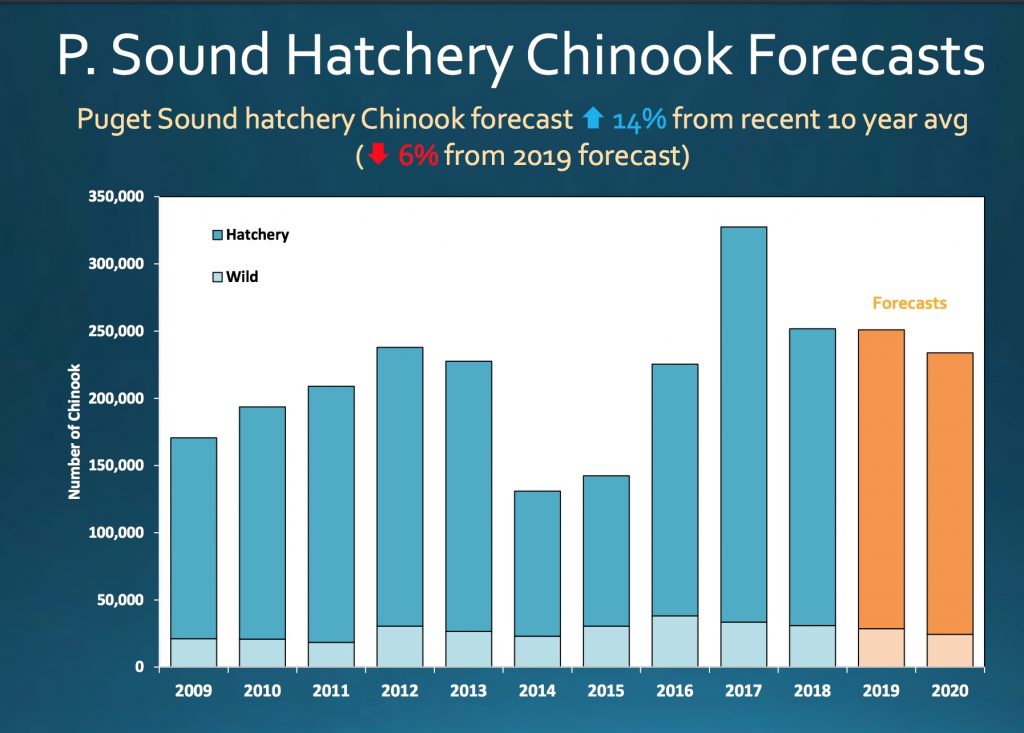 Determining the effect of fisheries on the whales is a more complex problem, especially considering that fishing has had less influence on the survival of salmon in recent years, as fishing seasons have been reduced to protect Chinook, listed as a threatened species.

“The whales are declining even in recent years when total salmon abundance has been at or above medium term average … and similar to abundances during periods when southern resident killer whales were increasing or stable over the 1992-2016 period examined,” the report says.

One reason could be that factors beyond salmon abundance may be playing a greater role in orca survival, birth rate and fitness than in the past, states the report. Such factors could include contaminants in the food web, noise around vessels, ship strikes, disease, competition from other marine mammals, inbreeding, more males being born, and behavioral changes.

While it would be reasonable to assume that a higher abundance of salmon in specific areas at specific times could improve the outlook for the whales, the statistical analysis found no specific areas or seasons associated with improved survival, birth rate or body condition, according to the report.

The analysis, presented to the Pacific Fishery Management Council, is expected to be followed up by a new round of discussions and specific recommendations from the experts. 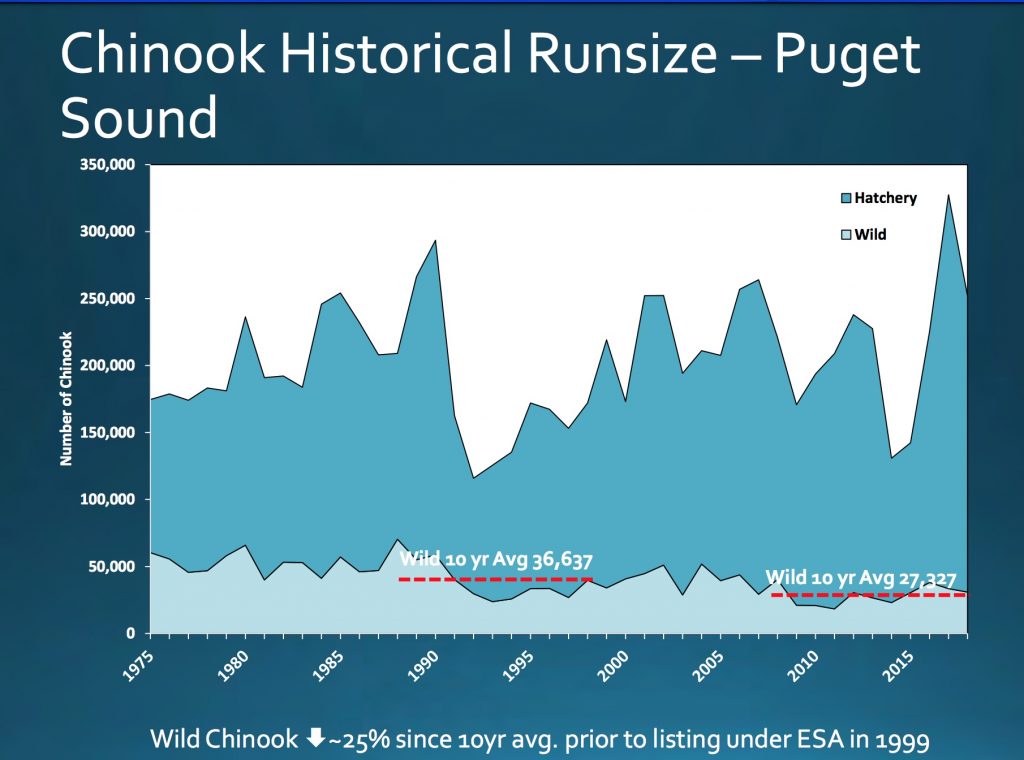 In responding to the report, some environmental groups argued that, given the acknowledged uncertainties, it is not enough to maintain current fisheries management based on an inability to find a statistical relationship between fishing and orca well-being.

“In light of declining southern resident killer whale population and concerns about SRKW genetic diversity, a precautionary approach would require evidence that the status quo is not harming SRKWs, rather than requiring a high degree of confidence in the precise assessment of harvest’s effect on SRKW demographics,” states a letter signed by Nick Gayeski and Josh Rosenau of Wild Fish Conservancy (PDF 694 kb).

Gayeski and Rosenau call for more analysis on the abundance, size and age structure of Chinook salmon wherever the fish go — including areas beyond those managed by the Pacific Fishery Management Council, including Canada and Alaska.

“As the authors observe, SRKW are not only Chinook specialists, they are specialists on large Chinook…,” they wrote. “SRKW evolved in a context where Chinook weighing over 100 pounds were commonplace in the Columbia River, Elwha River and other major Chinook rivers of origin.

“It is not hard to see that it would take many times more energy and time to catch 100 pounds of 10- to 20-pound salmon than it would have taken to feed on a single 100-pound salmon then,” their letter continues. “Nor is it hard to envision the effects on SRKWs complex social structure when so much time must be taken away from social interaction simply to maintain caloric intake. 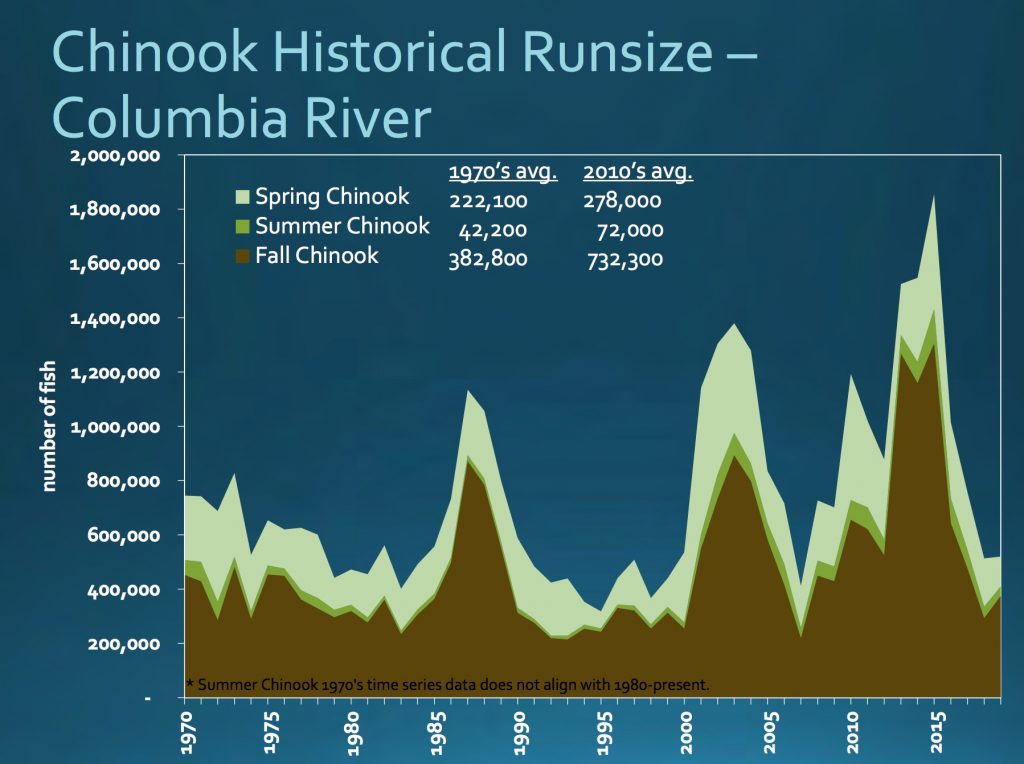 “It would hardly be surprising to find that this decrease in social interaction makes it harder to maintain pregnancies and sustain newborn orcas. The status quo of harvest management has driven this decline in Chinook sizes, and harvest management will be key to restoring SRKW prey quality, as well as quantity.”

They call for salmon management plans to include a threshold for Chinook abundance below which fishing for Chinook would cease.

Wild Fish Conservancy is preparing to sue the National Marine Fisheries Service for allegedly allowing the overharvesting of Chinook in the Southeast Alaska troll fishery, which catches Chinook that originate in areas to the south where the orcas feed. See WFC news release.

Meanwhile, it isn’t clear how the fisheries managers will use the report as they set salmon seasons, but the annual “guidance letter” (PDF 1.3 mb) from the National Marine Fisheries Service calls on them to take extra steps to reduce fishery impacts when Chinook runs are low.

“We reiterate our concern about the severely depressed status of the SRKW population,” states the letter from Barry Thom, regional administrator for NMFS. “We are particularly concerned about years with critically low Chinook salmon abundance throughout the whales’ geographic range because of the potential effects to the whales’ energetics, health, reproduction, and survival.

“Intuitively,” he added, “at some low Chinook abundance level, the prey available to the whales will not be sufficient to forage successfully leading to adverse effects (such as reduced body condition and poor reproductive success).”

The guidance letter calls for increased conservation measures, such as time and area restrictions, to reduce fishing pressure on the Chinook when the North of Falcon abundance is equal to or less than the average of the seven lowest years of abundance. Those years are 1994, 1995, 1996, 1998, 1999, 2000 and 2007.

NMFS officials must approve any fishing plans adopted by state and tribal managers through the North of Falcon process.

At the annual North of Falcon kickoff meeting last week, officials with the Washington Department of Fish and Wildlife reported that their forecasts of this year’s Chinook returns will be slightly lower than last year’s forecasts for Puget Sound stocks and somewhat higher for the Columbia River. A video of the presentation is available on the WDFW North of Falcon website.

This week, fisheries managers are meeting with the Pacific Fishery Management Council in Sonoma County, Calif. A major agenda item is to discuss numerical targets for salmon fishing, with three options scheduled for approval on Monday.

While fishing certainly can affect the abundance of salmon throughout the range of the southern resident killer whales, it is important to keep in mind the entire salmon life cycle, which can be affected by habitat in streams, Puget Sound and the ocean; weather and climate conditions; competition from other species; and the effects of disease on the entire food web.