Yesterday evening, high winds out of the east brought unwelcome smoke to the Puget Sound region. Living in the woods — which are very dry at this time — I became somewhat alarmed; I won’t deny it.

This past spring, I wrote about the historic wildfires of Western Washington and the likelihood that climate change could bring massive destruction to thousands of homes built in wooded areas. I did not want to see an affirmation of my story’s title, “Fire danger returning to Western Washington.”

Did we have the ingredients for a conflagration? Let’s see: 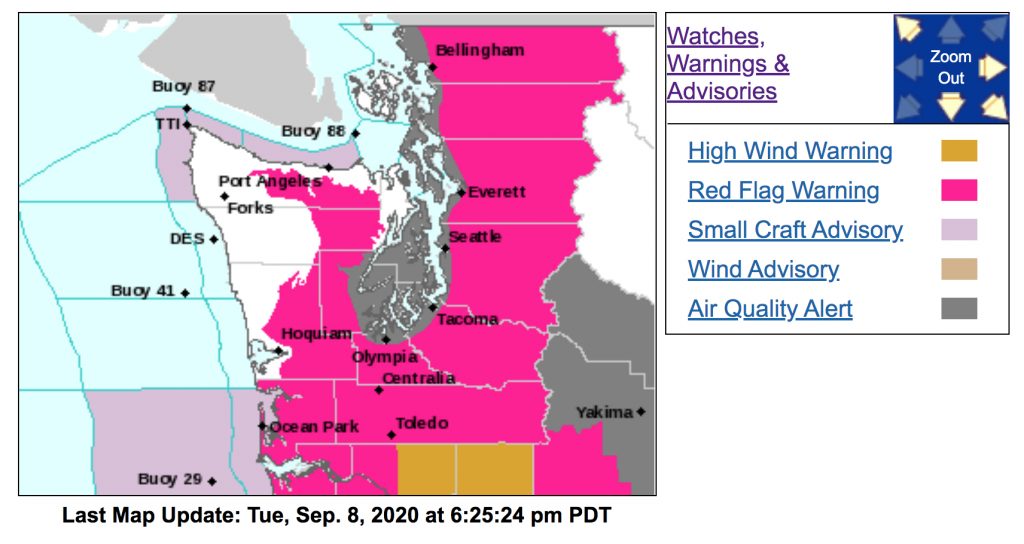 Thankfully, by morning, high winds, which had gusted to 40 mph in places, had died down over much of Western Washington. Yet, winds were still a problem in Pierce County, where firefighters battled multiple brush fires throughout the day today. In fact, as I write this Tuesday evening, new fires have not ceased. See East Pierce Fire and Rescue on Twitter along with a national map of wildfires.

With conditions extremely dry, it doesn’t take much wind to cause a fire to spread rapidly. But in the Puget Sound region we seem to have avoided, at least for now, the kind of winds that can spread fire over thousands of acres in just hours. While we may have avoided a conflagration, climate change continues to increase the chances that we will see such a fire in our lifetime.

“We dodged a bullet in a way,” said Dave Peterson, who studies fire science and climate change at the University of Washington’s School of Environmental and Forest Sciences.

The story might be different if these conditions had occurred a month ago, Dave told me, although there is no guarantee that severe conditions won’t spring up again, even this fall. Still, longer and cooler nights in September, often with high humidity, offer the hope that any fire will spread less quickly.

Bone dry conditions still pose plenty of risk, and the key is to keep from starting a fire in the first place. That means not taking a risk with any outdoor fires and being especially careful with outdoor equipment — including off-road vehicles of any kind.

“The situation is serious, and we really need everyone’s help limiting all ignition sources,” said Kitsap County Fire Marshal David Lynam in a news release issued this afternoon to extend the “burn ban” to all outdoor fires.

While the risk of a severe fire has been lowered for much of the Puget Sound region, a red flag warning remains in effect until Thursday at 11 a.m. for the Puget Sound lowlands and western slopes of the Cascade Mountains. Even more extreme warnings are in place for Southwest Washington into Oregon and, most of all, California.

Localized smoke, as well as smoke from Eastern Washington, has led to air-quality advisories for the entire Puget Sound region.

Total acreage burned in Eastern Washington since Monday has reached 300,000 acres, according to a notice from Commissioner of Public Lands Hilary Franz.

“We had a historic fire event yesterday – 58 new wildfire starts and nine large fires on the landscape, compounded by hurricane-level winds,” she said. “That dangerous combination led to smoke-filled skies and low visibility, which grounded our aircraft and limited our ability to fight the fire from the air.

“The destruction we have seen is unimaginable,” she added.” My heart breaks for the residents of Malden who have seen their homes destroyed.”

Driven by high winds, the fire in Malden, south of Spokane, destroyed about 70 percent of the homes in the farming community, along with city hall, the fire station, post office and many businesses, according to fire officials, quoted in the Spokesman Review.

It is a heart-breaking situation for the residents of Malden, as it was for the now-infamous Camp Fire in Paradise, Calif. Thankfully, Western Washington has been spared what could be an even more devastating fire as the summers grow drier over time. But nobody should think that we will be spared forever.