A new film, titled “The Lost Salmon,” opens with a video montage that takes us through some wondrous scenes: A wide aerial shot of California’s majestic Salmon River, moving to an underwater view of salmon swimming through the clear water and then to an action spectacle of wild salmon practically flying through the air to surmount a rushing cascades.

The filmmaker, Shane Anderson of Olympia, merges passion, culture and science in this documentary that premieres tomorrow on public television. The project culminates years of investigation and filming, as Shane follows Chinook salmon to magnificent upstream areas where the fish are beckoned as a result of their genetic makeup. 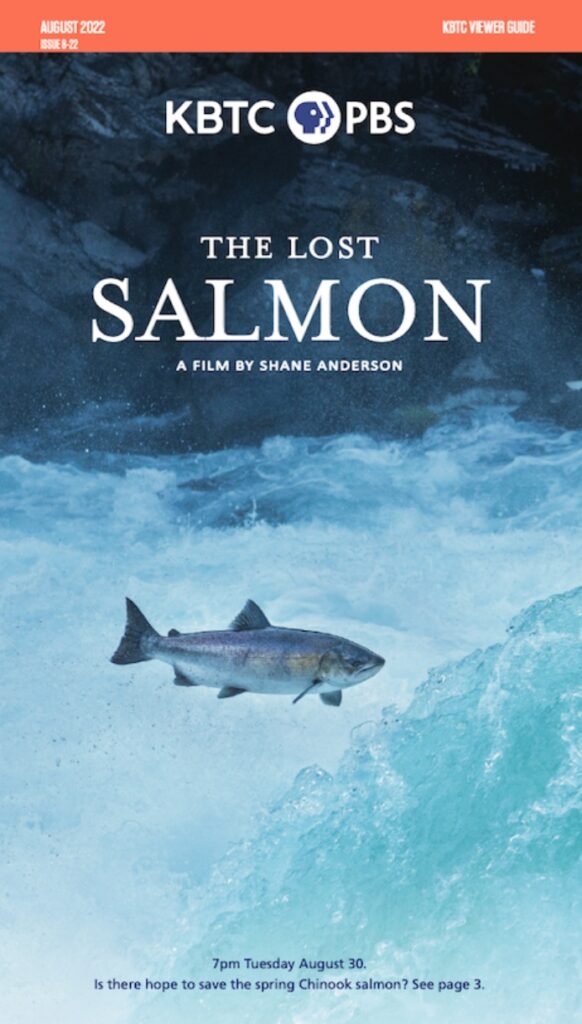 The journey crosses into the human realm, where we learn about Native American culture, the history of habitat destruction, and new scientific breakthroughs. The film also explains how genetics plays into legal battles that could decide whether spring Chinook will gain federal protections apart from fall Chinook in the same rivers.

Shane named his documentary “The Lost Salmon” for the many spring runs of Chinook that have already disappeared and for those heading toward extinction, he told me. “We are looking down the barrel at futures losses if we don’t pay attention and implement better policies,” he said.

The new documentary will be broadcast tomorrow (Tuesday) at 7 p.m. on KBTC, the public broadcasting station in Tacoma. See “Where to watch KBTC” for specific channels. On Friday, Shane was interviewed by Tom Layson for the station’s weekly program Northwest Now.

“As the first salmon to arrive home, the spring run of Chinook have one of the most fascinating migrations in the animal kingdom,” Shane says in his narration of the film. “They are species of desire for an entire ecosystem but victims of a modern world.

“Why has one of the most revered animals on Earth been allowed to virtually disappear from the vast number of rivers they once called home? What does their future hold?” Shane asks, then follows with, “These questions led me on a two-year journey throughout salmon country in search of the last wild springers while exploring their connection to people and place and a new genetic discovery that could help save the king of salmon before it’s too late.”

Shane said putting himself into the film, not only as narrator but also as a character meeting up with other people, was a decision that came near the end of the production. “It would have been hard to weave all the interviews together without the narration footage,” he explained.

One thing that captured Shane’s imagination, such that it became a driving force in this new film, is the discovery of a genetic code linked to the early migration of spring Chinook. Fish that possess this code in their DNA tend to swim upstream during the spring snowmelt, often fighting strong currents, while fall Chinook without the gene tend to stay in saltwater awaiting the rains of autumn.

The implications of this genetic discovery are many, including a growing understanding that the loss of spring Chinook in any stream may be the end of the line for a unique and ancient lineage. The idea that fall Chinook, with a different timing strategy, might convert into spring Chinook has been largely discounted by ongoing research.

Like Shane, I became interested in these connected issues of genetics, culture and ecological assets surrounding spring Chinook. I interviewed experts, tribal leaders and salmon managers, eventually writing a story about these interwoven issues. See “Early migration gene tied to unique population of Chinook” in the Encyclopedia of Puget Sound. The apparent loss of spring Chinook in the Elwha River after impassible dams were constructed became a key part of my recent story “Returning home; The Elwha’s genetic legacy.”

Since my first involvement with spring Chinook, the importance of protecting these early runs has come into better focus. Nevertheless, how the populations are identified and protected under the federal Endangered Species Act remains the subject of an ongoing debate. The debate also involves early runs of steelhead that, like spring Chinook, bear an “early-migration gene” that pushes them onward, from the Pacific Ocean to the upper reaches of streams, including some as far away as the mountains of Idaho.

Because these early migrants travel from the ocean to the tributaries of other tributaries, they have been called “mariners and mountaineers,” a phrase described in Shane’s new movie.

A strong case can be made that spring Chinook should be considered a separate population — or conservation unit — apart from fall Chinook in the same stream, thus receiving a separate listing under the Endangered Species Act. This could give special protection to somewhat different “critical habitat” as well as a separate recovery strategy for spring Chinook.

Some experts are reluctant to define a population based on a single genetic difference, even when that difference tends to segregate fish of the same species within a stream. One argument is that spring and fall Chinook represent a powerful diversity within the same conservation unit, managed as “Ecologically Significant Units” (ESUs) or “Distinct Population Segments” (DPSs).

So far, the National Marine Fisheries Service, which determines endangered salmon species, has generally chosen not to split spring Chinook from the fall Chinook that occupy the same streams. Likewise for early-returning summer steelhead. However, last year the state of California took a different approach for Chinook in the Upper Klamath-Trinity Rivers, where state officials listed spring Chinook alone as threatened. Federal action on a petition for listing spring Chinook in the Klamath — alone or else together with fall Chinook — is still pending.

Even if spring and fall Chinook are maintained as a single conservation unit, the new genetic findings have significant implications for managing the at-risk spring Chinook, according to an article authored by a variety of experts on the subject, including those from federal, state and tribal agencies as well as university laboratories.

“Spring Chinook salmon and summer steelhead occupy a specialized ecological niche — upstream areas accessible primarily during spring flow events — and status-review and recovery-planning teams have consistently concluded that viable populations of both early- and late-migrating forms are necessary for the larger ESUs as a whole to be considered viable,” states the article published in March in the Journal of Heredity. The article goes on to say that the only practical way to maintain the unique genes of early-run fish is to maintain upstream habitat that supports these fish as well as access to it.

Shane told me that he started out planning to feature spring Chinook within a profile on Mike Miller, a salmon geneticist whose ground-breaking work uncovered the effects of the early-migration gene. While this researcher with a passion for salmon remains a major character in the film, Shane went far beyond the scientific findings in his storytelling with journeys that took him to rare places of refuge that still exist for spring Chinook.

Growing up in Olympia, Shane came to love wild salmon, which led him back home after a period of time in California, where he moved after high school and worked as a professional downhill skier. He became involved in the film and television industry in Los Angeles and studied fisheries biology at Humboldt State University in Northern California.

“I decided to merge my interest in film and biology together,” he said, and in 2012 started his own production company, North Fork Studios, and began producing a series of award-winning films. Three films — “Wild Reverence,” “A River’s Last Chance” and “Chehalis: A Watershed Moment” — have been shown on PBS stations locally and across the country.

In the new film, Shane’s creativity and that of his support staff comes out in many ways, large and small. You might notice water flowing in a historical photograph of fishermen on a river or salmon leaping into a waterfall within an old picture taken before movies were invented.

“We started playing around with that technique a few years ago, working with a graphics designer,” Shane said. “Basically, you upload old photos and move the pieces around. We can make water run or smoke come out of a smokestack. But I’ve never seen fish jump.”

After tomorrow’s showing of “The Lost Salmon,” Shane intends to make the rounds of film festivals, where he will speak in person, often with one or more scientists studying spring Chinook. He’s also working on a film, due out in October, about the relationship of the Nez Perce Tribe to the salmon obstructed by dams on the Snake River.

He is also documenting the removal of four dams on the Klamath River, where the genetics of salmon has captured the interest of many scientists. He intends to complete that film project once the dams are gone, perhaps in 2024.

“Genetics is such a unique thing, especially in salmon,” Shane said, “but it hasn’t been applied enough in management practices, essentially ignoring the instruction manual of evolution.”