State legislation designed to enhance salmon habitat by requiring protective buffers along streams has been set aside pending further discussions over the coming year. Meanwhile, several other salmon-protection measures proposed by the governor could move forward with decisive funding from the Legislature.

The buffer bill (HB 1838), named the Lorraine Loomis Act, would prohibit degradation of streamside habitat while encouraging restoration within prescribed “riparian management zones” on both public and private lands. Such requirements would apply to farmland, areas destined for development and even properties undergoing redevelopment. The bill is part of Gov. Jay Inslee’s wide-ranging “Salmon Strategy Update” (PDF 1.4 mb), which was proposed with a price tag of $187 million for the first year, according to a policy brief (PDF 1.4 mb) on the topic.

Maintaining vegetation — including tall trees — along streams helps to shade the water and avoid temperatures that can be debilitating or lethal to fish. (See my story in the Encyclopedia of Puget Sound.) Vegetated buffers also can filter out pollution from upstream areas, provide food and shelter for fish and wildlife, and help to mitigate high and low streamflows.

During recent hearings, numerous farmers and representatives of agricultural groups complained that they had not been consulted before the buffer bill was dropped on them. They said the stream-buffer requirements could take a severe financial toll on their operations, even if they were provided with some compensation for production losses and grants for restoration, as proposed in the bill.

Faced with this powerful opposition, the bill never came up for a vote in the only committee where a hearing was held: the House Rural Development, Agriculture and Natural Resources Committee. (Videos available via TVW.)

On the Senate side, the handwriting was already on the wall. On Feb. 3, the Senate Agriculture, Water, Natural Resources and Parks Committee held a work session on the governor’s salmon strategy. Sen. Kevin Van De Wege, the committee’s chairman, asked the governor’s staffers if they had done any public polling to measure support for the buffers bill.

Jennifer Hennessey, the governor’s policy adviser on environment, water and ocean health, said she was unaware of any polls on the issue. The legislation resulted from discussions about the needs of salmon with Washington’s native tribes, she noted.

“We certainly recognize that there is more work that needs to be done to talk about the needs of riparian habitat with a variety of stakeholders and the way we get to the end goal of improving habitat for salmon,” Hennessey said.

While legal mandates for buffers are off the table for the current legislative session, other aspects of the bill could be accomplished with funding in the supplemental budget, a draft of which should soon be made public. 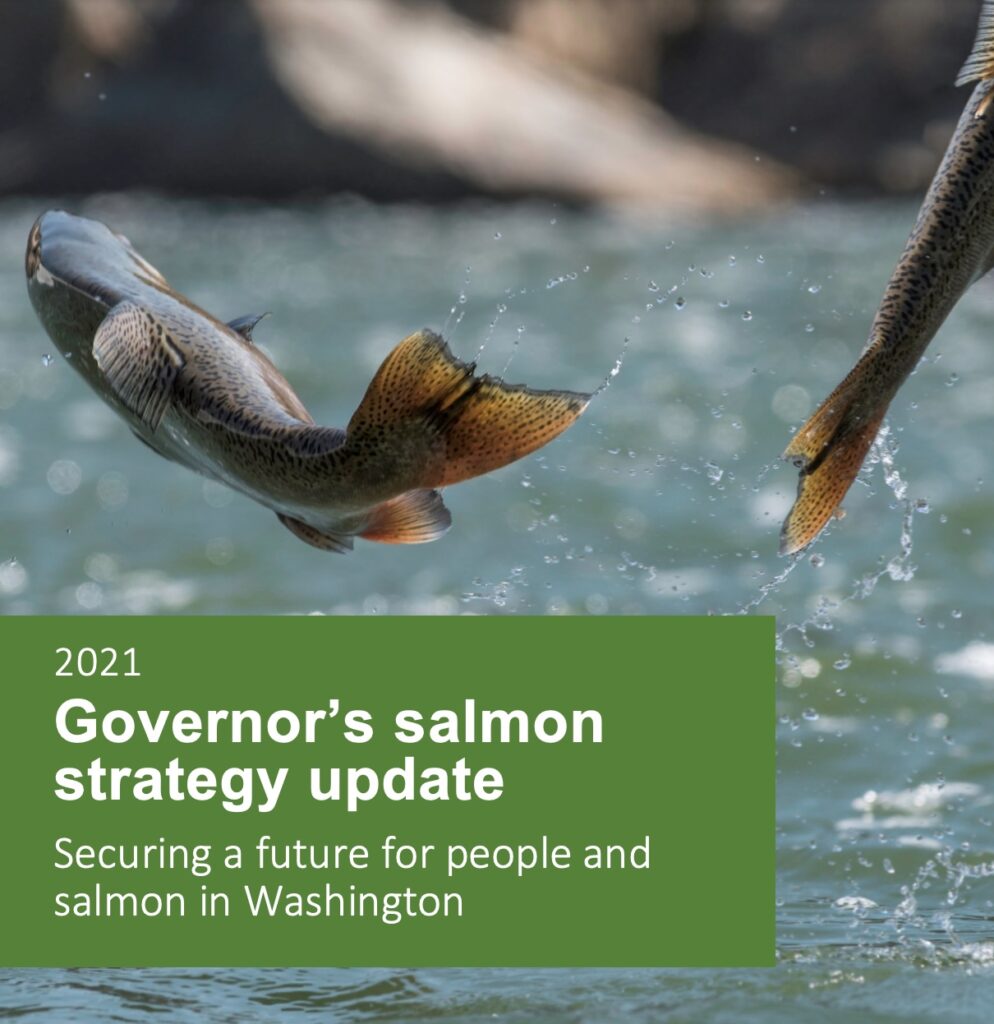 Under consideration for funding is a process to facilitate a “diverse stakeholder group” that would discuss buffers as part of a legislative package for the next session, according to Sen. Christine Rolfes, D-Bainbridge Island, who chairs the Senate Ways and Means Committee.

Other programs described within the bill could be started or enhanced with dedicated funding, she said. They could include high-tech mapping to locate important streamside habitat, an analysis to identify high-priority areas for restoration, and a program to build up a nursery stock of trees for extensive planting efforts. Appropriations for these efforts would be directed to the state departments of Ecology and Fish and Wildlife.

Protecting salmon streams with vegetated buffers is an urgent need in the effort to restore salmon populations, as climate change increases its impact, said Dave Herrera, fisheries and wildlife policy director for the Skokomish Tribe and vice chairman of the Puget Sound Salmon Recovery Council.

“The tribes have been talking about the need for adequate riparian buffers for a long time, not just on agricultural land but for all lands with salmon streams,” he said. In 2019, during the annual Centennial Accord discussions, Gov. Inslee made a commitment to the tribes to establish statewide buffer standards. (See the June 4, 2020, column by the late tribal leader Lorraine Loomis, for whom the legislation is named.)

Representatives of the Washington Department of Agriculture and Washington Conservation Commission were involved in meetings about the buffer standards, Herrera said. “I was surprised to hear that the communities served by those agencies were not aware.”

Herrera said he is now getting a lesson about the pace of the legislative process and remains optimistic that people will come to understand the needs of salmon in time to save them. Failure of the Lorraine Loomis Act during this legislative session is a setback, he said, but things are at least moving forward.

“To his credit, the governor stepped up and developed a bill that got introduced, and it is setting up a conversation that we have been needing for a long time,” he said. “People need to understand the urgency. It is getting to the point where we have to ask ourselves if we really want to recover salmon or if it is just too hard for us to do.”

As proposed, salmon streams would be mapped with riparian management zones to identify the width of required buffers. That width relates to the area’s 200-year “site potential tree height” — the height that an average tree would reach in 200 years in a given location. Thus the buffer can range from 100 to 240 feet from the edge of a stream, depending on soils, rainfall, topography and other factors. These are the standards recommended in a report called “Riparian Ecosystems, Volume 2, Management Recommendations” by the Department of Fish and Wildlife.

Using tree height to establish the buffer width is partially based on the idea that trees falling into a stream add critical structure, helping to create pools and riffles needed for safe salmon migration and spawning. The idea grew out of findings from a 1993 report by the multi-agency federal Forest Ecosystem Management Assessment Team (PDF 68.5 mb), or FEMAT.

Some people testifying against the proposed buffers bill say the tree-height approach lacks an adequate scientific foundation to become a requirement in state law. No doubt this will be a major topic of discussion during the anticipated stakeholders meetings, which are likely to include representatives of farmers, developers, local governments, businesses, environmental interests and more. By the way, forestland that is subject to the Washington Forest Protection Act must comply with separate buffer regulations, which undergo changes based on emerging science.

As written into the proposed legislation, the required buffers on private land could be reduced if the protected area takes up more than half the parcel.

Several people who testified on the buffers bill worried that it would supplant a voluntary stewardship program in which farmers work with local government experts to establish reasonable buffers protective of salmon habitat without overly affecting their livelihood.

“Voluntary programs do work when they are sufficiently funded, but the state has not provided enough funding,” said Tom Salzer, executive director of the Washington Association of Conservation Districts, which represents 45 local districts.

Over the last three biennia, the Washington Conservation Commission requested nearly $20 million for the Conservation Reserve Enhancement Program, Salzer testified during the first hearing on the bill. That program provides $3 in federal funds for every $1 in state funding for habitat protection and improvement. The Legislature provided less than half the requested amount, losing out on nearly $30 million in habitat restoration money, he said.

“We believe that if sufficient funding had been provided for voluntary conservation, today there would be no perceived need for this legislation, he added.

The Voluntary Stewardship Program, created in 2011, enlisted 27 of the 49 counties before a cutoff deadline in 2012. A new bill in this year’s Legislature (HB 1856) would allow any other county to join by July 1, 2023. The main concern expressed during hearings on the bill was that each local program would receive even less money if the Legislature failed to increase overall funding. The bill is now up for a vote on the House floor.

Beyond the proposed buffer requirements now on hold along with a proposal for $100 million in grants for affected property owners, the governor’s revised salmon strategy includes the following elements:

Behind-the-scenes budget negotiations over salmon funding have been ongoing this week, with decisions to affect funding for these proposed projects that could be started this year.