It is the year 2020. You could say that the time has run out for restoring Puget Sound to a healthy condition. But time marches on.

When the Legislature created the Puget Sound Partnership in 2007, lawmakers included this sentence in state law: “It is the goal of the state that the health of Puget Sound be restored by 2020.”

The Partnership then proceeded to establish “Vital Signs indicators” to measure progress along the path to restoration, along with “targets” that describe the conditions that should be observed by 2020. 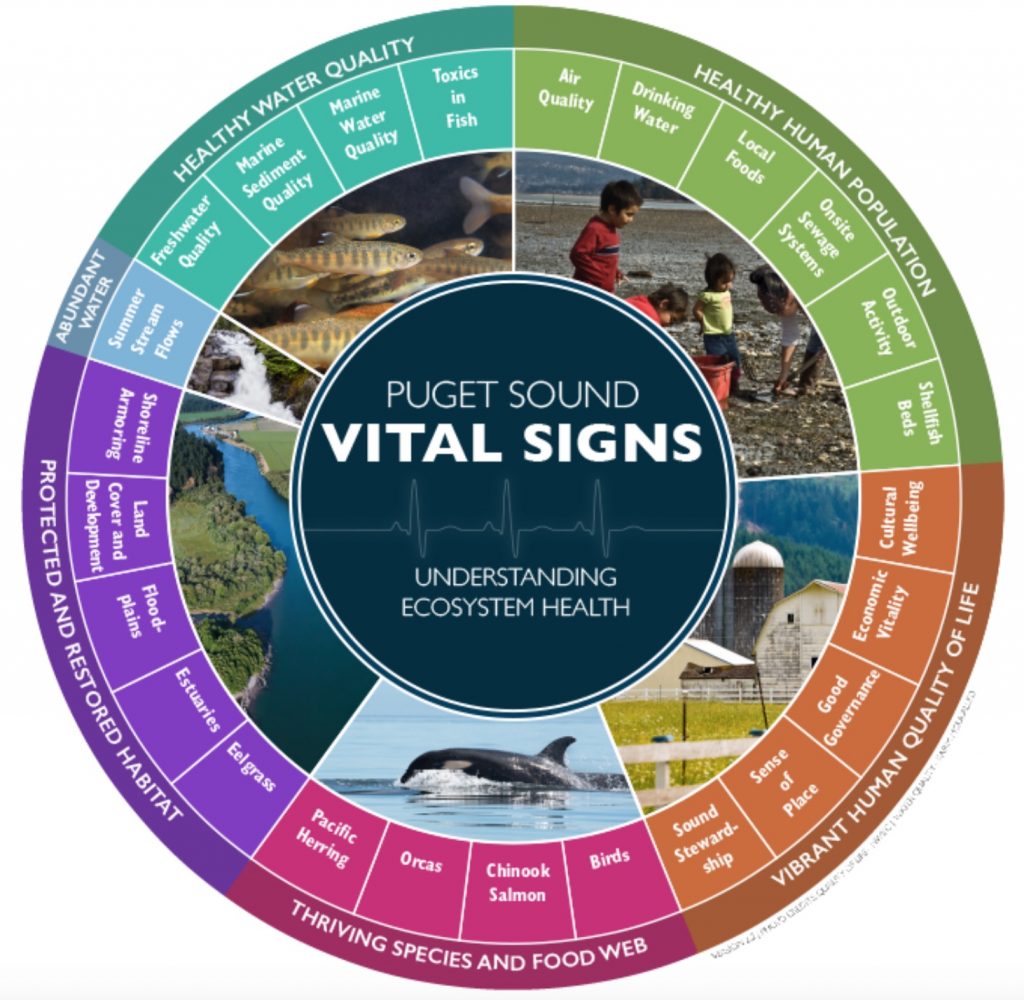 While a healthy Puget Sound is still a distant goal, restoration work continues throughout Puget Sound. Today, scientists better understand what it will take to achieve a healthy ecosystem, and they will soon unveil some new ways of measuring progress — which I will touch on later in this blog post.

Out of 31 indicators that have been assigned targets, only four have reached or nearly reached their 2020 targets, according to the latest State of the Sound report. Specifically, these big achievements relate to:

To be fair, progress cannot be measured for nine indicators that have targets, because data is lacking. Other selected indicators have sufficient data but no targets. According to the State of the Sound report, 10 indicators are showing improved conditions, nine are showing mixed results, and seven are showing no measurable change.

That leaves just three indicators for which their conditions are declining, yet most people would probably agree that these declining indicators are among the most essential features of Puget Sound:

For a quick synopsis of all the vitals signs, click on any of the 25 indicator groups found on the Puget Sound Vital Signs “wheel,” or click on the image on this page.

While a person could bemoan the lack of progress in achieving the targets by 2020, one could find hope that many conditions have improved, despite an increasing human population. I remember writing about the first few State of the Sound reports, which offered embarrassingly few signs of hope. Check out the State of the Sound Archive. 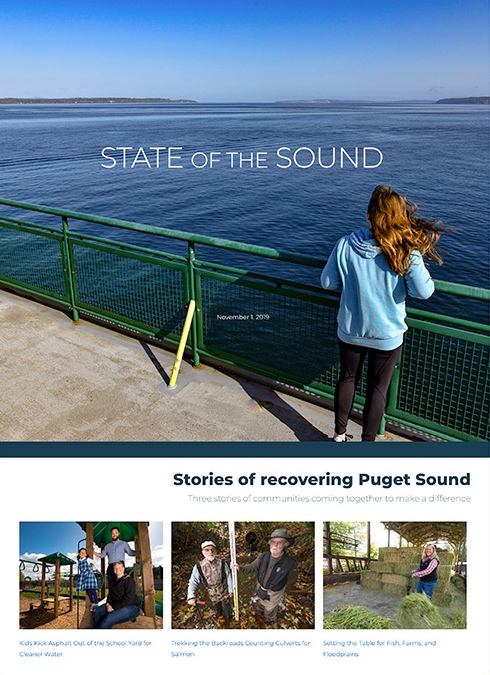 From the start, it was considered almost impossible to achieve all the 2020 goals in less than a decade. When the targets were adopted, people called them “aspirational,” as opposed to realistic. The idea was to keep from setting the goals too low, for fear that the effort would be too limited. Yet I also recall people worried about the repercussions of falling short.

As 2020 approached, those involved in the restoration effort came to the realization that the Legislature had it all wrong. There would never be an end to the restoration process, because population growth would always be a counteracting force. The new message was to treat Puget Sound like human health, with a need for ongoing activity, improvement and maintenance.

With the year 2020 approaching, it was time to rethink the indicators and perhaps replace the outdated targets, a process that was described in an October 2018 blog post by Jeff Rice, managing editor at the Puget Sound Institute.

Now scientists and policymakers are deciding which Vital Signs indicators adequately measure progress and tell a story about Puget Sound restoration, which indicators need to be eliminated, and what kind of replacements might work better.

Laura Blackmore, executive director of the Puget Sound Partnership, said the current indicators are not perfect, but they have endured.

“What is really interesting to me in this process is how much people love the Vital Signs,” Laura told me. “Some people had horror on their faces when we told them we might change them. I think we will want to use a light hand.”

Still, the process of choosing indicators this time has generally followed the basic pattern used more than a decade ago, starting with dozens, if not hundreds, of measurable quantities related to the Puget Sound ecosystem. This time, review teams have the advantage of extensive analyses conducted on the previous list of indicators. They include a 2012 report from the Washington Academy of Sciences (PDF 4.1 mb) and a 2018 report led by Sandra O’Neill of the Washington Department of Fish and Wildlife. The new effort is supported by Ross Strategic, an environmental consultant.

It is generally understood that Vital Signs and their indicators are used to help people do three things:

“What I find compelling about the State of the Sound report,” Laura noted, “is the ability to tell a story. How can we design a system to tell the story of Puget Sound recovery?”

In recent years, the report has included more stories about the many ways that Puget Sound is valued by average people who live, work and play on the waterway. 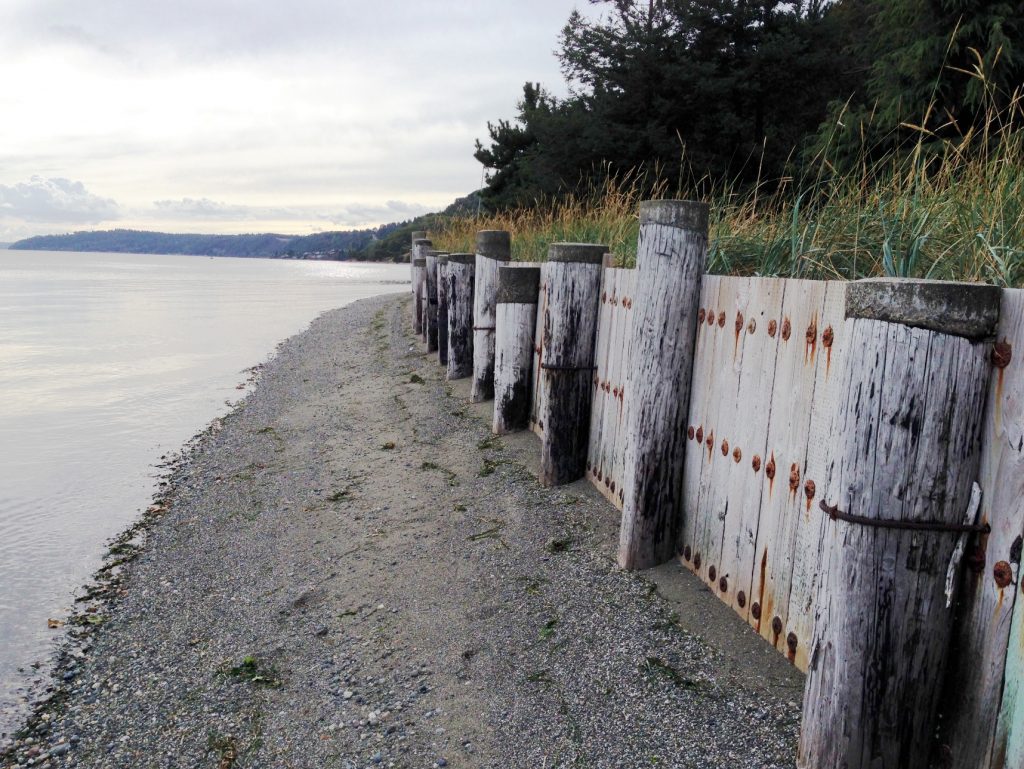 Over the past few years, much work has been done to develop “implementation strategies” for reaching the 2020 targets. The strategies help people understand the natural forces and human impacts that help or hinder progress toward ecological health. The strategies include diagrams with boxes and arrows to describe how one change can lead to another.

To effectively carry out the implementation strategies, new measures may be needed to gauge progress at key points in the system, said Scott Redman, director of science and evaluation for the Partnership. “We could grow the list of Vital Signs indicators, which is exactly the opposite of what some people want,” he noted.

One option is to develop a new list of ancillary measures that don’t show up on the Vitals Signs wheel but can be used to measure the changing health of the ecosystem. The current system of monitoring could thus be expanded to better understand the pressure points on the ecosystem, as described in the implementation strategies.

I’ve only touched on the ideas coming out of the Vitals Signs Revision Project, but we will be reporting on specific proposals in the coming months.

Scott said a plan for the revised indicators should be available for public review in early April, with final approval in June when action is scheduled by the Puget Sound Leadership Council, the governing board for the Partnership.

After that, new targets could be proposed in a separate process, but it isn’t at all clear how the Partnership will address long-term goals. One option would be to set targets for a future date, such as 2050, which happens to be the deadline chosen for salmon recovery, Laura Blackmore told me. Other concepts include measures of ecosystem resiliency or moving targets in response to ecosystem changes. A major question is whether we can live without a target date, possibly eliminating goals altogether. But that might be seen as a step backward, if not failure.

“Given human nature,” Laura said, “I think that targets are an effective way to keep the pressure on.”