More than 2,000 segments of streams, lakes and marine waters have been added to the state’s massive list of water-quality data, allowing more Washington residents to take stock of pollution levels near their homes.

The latest Water Quality Assessment for Washington waters, released for public review this week, covers 9,279 miles of streams, 434 lakes and 619 square miles of marine waters. One can use the statewide Draft Water Quality Atlas to zoom in on places of interest and review available information on a given water body.

This vast database, which contains 65 million data entries, is managed by the Washington Department of Ecology. It is used to list polluted water bodies as “impaired” — designated Category 5 — if they fail to meet state water quality standards. If they are not so bad or data is insufficient, they may be listed in categories from 1 to 4. 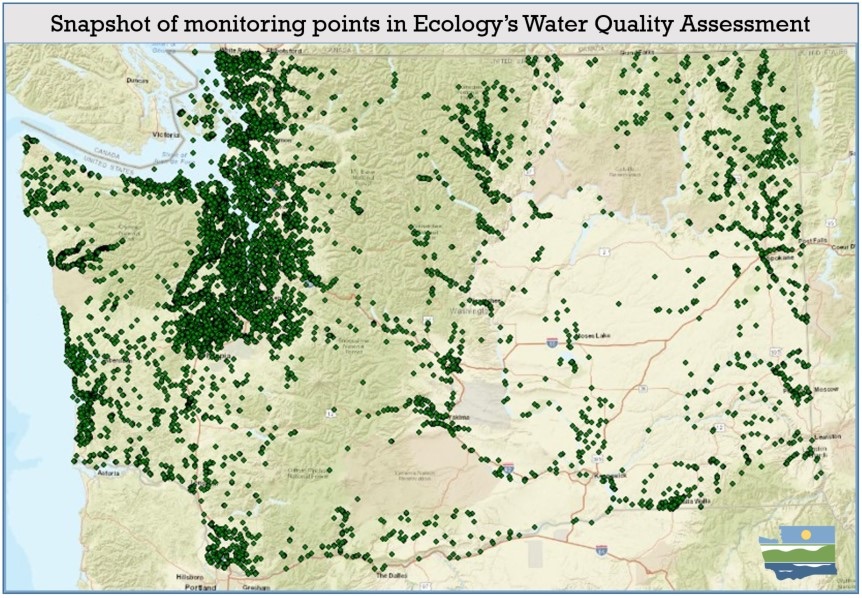 Washington’s Water Quality Assessment, required under the federal Clean Water Act, is one of the most extensive assessments produced by any state in the nation, according to Ecology officials. The data can be a guiding light for pollution-reduction and habitat-improvement projects. It also reveals gaps in knowledge about problems that may be causing a decline in fish, wildlife or aquatic vegetation.

While the database contains a mind-boggling amount of information, the data cover only 13 percent of identified stream miles, 21 percent of the total marine area, and 10 percent of the lakes in the state, according to figures provided by Jeremy Reiman, water quality assessment scientist for Ecology. As such, they are not a good indicator of trends, especially when considering that water-quality standards themselves change over time, he said.

The data are more like a snapshot of conditions at a given point in time, but the good news is that more than 100 listings of polluted waters have been upgraded to clean after meeting water-quality standards. Much of the improvement can be attributed to water cleanup efforts involving state, local and tribal officials working with local residents and business owners.

The most common water-quality problems are elevated water temperatures, which have direct impacts on salmon, and high bacterial levels, which can threaten human health and force closure of shellfish beds. Combined, those two problems make up more than half of all the impaired listings. Other problems include low dissolved oxygen levels and excessive contamination from a list of more than 100 toxic chemicals.

Data are collected by Ecology staffers; federal, state and local agencies; tribes; and anyone who receives state grants to work on water-quality issues. Others can submit data, provided it meets specific quality controls.

Ecology will be taking comments on the water quality assessment until June 4. For information, go to the Water Quality Assessment webpage. Those who would like more information on the document and the overall process can sign up for an April 20 webinar from that page.

If you would like to jump right in, a good starting point with the Water Quality Atlas is to click on “add/remove map data” at the top of the page, select the first box “assessed water/sediment” and hit “go.” Then go to “Zoom” at the top of the page, type in an address in the left column and hit “go.” From there, one can use “+/-“ to zoom out until you see water bodies. Click on those elements to reveal available information.

Instead of using an address, you can name a stream, lake or marine region under the heading “map area” in the left column and type in a name, selecting from the drop-down menu. That section also includes options for cities, counties, highways and more. The map and its data have grown more sophisticated over time, and there are plenty of things to review.

One of the new features is demographic information from the U.S. Census, connecting a water body with information such as income, education and language proficiency of people in the area. Ecology and others can use the information to make sure they are focused on environmental justice issues while setting priorities.

Since the last Water Quality Assessment in 2016, 11 cleanup plans have been approved by Ecology for one or more water-quality problems. These plans are nicknamed TMDLs, because they include limitations on pollution from different sources, spelled out as “total maximum daily loads.” New TMDLs for Puget Sound include the Pilchuck River in Snohomish County, the South Fork of the Nooksack River in Whatcom County, and Padilla Bay in Skagit County.

For a variety of streams in Kitsap County, Ecology has proposed an alternative process called “straight to implementation” instead of state-managed investigations and cleanup plans. This proposal is the result of Kitsap’s 30-year history of monitoring for bacterial problems, tracking down sources of pollution and correcting the problems. See Water Quality Assessment Submittal to EPA (1.4 mb), which includes streams in other areas as well.

Kitsap’s Pollution Identification and Correction (PIC) Program, managed by the Kitsap Public Health District, has been tried successfully in other counties, some with the help of federal funding. So far, only Kitsap and a few other counties have an aggressive, ongoing, fully funded program in place. Check out Kitsap’s numerous water-quality reports.

“Kitsap has a very disciplined and focused effort,” noted Melissa Gildersleeve, watershed management supervisor for Ecology, adding that the health district enforces locally adopted ordinances to ensure cleanup in those rare cases when voluntary actions are not successful.