A surprise visit by K pod on Saturday near Vancouver Island led to the official confirmation of a new orca calf born into the Southern Resident killer whale community.

The new calf, designated K45, is the second baby born to the Southern Residents this year, as recorded by the Center for Whale Research, which maintains the official census. For K pod, this is the first confirmed calf to be born since 2011.

The youngster was first reported on April 28 by a fishing guide cruising off the Oregon Coast. The new baby was captured on video (this page) swimming alongside K20, a 36-year-old female named Spock. Other whales in K pod were also nearby in the video, so CWR experts delayed their confirmation of the mother and calf, according to research director Michael Weiss, who took his position in May.

With K pod approaching the Salish Sea on Saturday, a team from CWR met up with the whales off Race Rocks at the southern tip of Vancouver Island. Given a clear view of the orcas, they were able to confirm the presence of the new calf, now listed as Spock’s second offspring (CWR news release and encounter report). The first offspring, a male named Comet, K38, was born in 2004. In her early years when she was named, Spock was thought to be a male because of the angular shape of her dorsal fin, according to folks at The Whale Museum.

This latest encounter with K pod and the new baby orca comes amid renewed concerns about the well-being of the Southern Residents along with a flurry of activity to increase protections for the animals. The population of these endangered orcas, currently numbering 75, is down from 98 animals in 1995. The nonprofit group SR3 — Sealife Response, Rehabilitation and Research — has reported that 12 of the whales in J and L pods have been showing signs of malnutrition, setting off alarm bells among state and federal officials.

The body condition of these whales was classified as BC1, the lowest ranking on a scale from one to five. This physical state has been related to a much higher risk of death, up to three times higher than whales in a healthy condition, according to studies.

SR3’s findings of poor body condition among the orcas, including a pregnant female, caused the Washington Department of Fish and Wildlife to declare the whales “vulnerable.” The agency followed up with an emergency order requiring commercial whale-watching boats to stay at least half a mile back from the whales. The order (PDF 312 kb) spells out the physical conditions of the individual whales as well as factors that triggered the emergency order.

“While we have reason to remain hopeful with the reports of recent pregnancies, the reality is that there are several Southern Residents that aren’t doing well, and we’re very concerned about the population at large,” said WDFW Director Kelly Susewind in a news release.

SR3 uses drones to take aerial photographs from well above the orcas to measure their length and girth and assess their body condition. One key measurement is the angle of the two white “eye patches” — one on each side of an orca’s head — which provides an indication of body fat. Those measurements led to the recent declaration of vulnerability for the orcas. In addition, two young whales were showing slower-than-expected growth, and one was also exhibiting lower-than-average body condition.

“Our non-invasive photogrammetry research can identify whales in poor health that have a higher risk of death in the subsequent months, and our aim is to identify these vulnerable whales before their condition becomes terminal,” said Holly Fearnbach, marine mammal research director with SR3. “Similarly, we can identify females in the latter stages of pregnancy, which is an important but fragile time for successful reproduction.”

The special restrictions do not apply to transient (Bigg’s) killer whales nor to other whale species, but boaters are urged by WDFW to treat all killer whales as Southern Residents and maintain the half-mile distance unless one is certain of the identity.

Washington law requires vessels to stay at least 300 yards from Southern Resident killer whales and at least 400 yards in front and in back as the whales are traveling. See the “Be Whale Wise” website, BeWhaleWise.org.

State and federal authorities have indicated that they are stepping up enforcement — sometimes with heavy penalties — for boaters who violate the rules.

In October of last year, one boater was accused of getting too close to the Southern Residents and ended up paying a $2,700 fine. The previous month, a similar incident by another boater resulted in a $300 fine. Both boat operators were driving rental boats. The main difference, according to a news release from NOAA Fisheries, was that one boater had ignored information given to him about protecting the whales along with a whale-warning flag that he could fly when whales are present. The other operator had not been given any information and said he was unaware of the rules.

“People can help us by spotting suspected violations and providing as much information as they can as soon as possible,” said Greg Busch, assistant director of the West Coast Division of NOAA’s Office of Law Enforcement. “It is important for boaters to know the rules before they get on the water. The more people who know the rules and help identify violations, the better protected the whales will be.”

Violations can be reported through the “Be Whale Wise” website.

The Coast Guard last month kicked off Operation Be Whale Wise with advice for boaters operating around whales. A news release includes a link to the B.C. Cetacean Sightings Network, which has set up web and mobile apps for reporting the presence of whales. Be Whale Wise also has a marine mammal sightings form.

Each year, the Center for Whale Research provides the federal government with a census count of the Southern Residents, listing any births and deaths during the year ending July 1. Years ago, all the whales frequently came into Puget Sound early and often enough to complete the census around July 1, although the deadline for submission is Oct. 1.

This year, as in most recent years, there is still uncertainty around some groups of whales and some individuals, although more is known this year than last year at this time, according to Michael Weiss, research director for the center.

By my count, from Jan. 1 to July 1, experts from the center reported on 13 encounters with J pod in 2022, compared with eight in 2021. In that time frame L pod was observed five times this year, compared to three times last year.

Michael told me that this year’s encounters offer some assurance that no whales are missing from J pod, but the sightings do not account for all the smaller groups in L pod — sometimes called “subpods.” L pod is no longer the large cohesive unit that it once was, perhaps in response to declining prey in inland waters.

In fact, the five encounters with L pod whales up until Saturday all involved only the relatively small L12 group, Michael said. That still left the majority of the 33 individuals in L pod unaccounted for but probably somewhere along the West Coast. He noted that L89, a 29-year-old male named Solstice, was not seen with his mother, L22 or Spirit, estimated to be 51 years old.

“It is still possible that he was foraging far away from the rest of the group or is currently associating with other L pod whales,” Michael said in an email. “While we would expect L89 to be with his mother L22, we are not declaring L89 deceased.”

As for K pod, CWR researchers had four encounters from Jan. 1 to July 1 last year, but none this year. That lack of data for this year’s census changed on Saturday, when portions of all three pods were seen off Vancouver Island, and researchers tried to identify and take photos of as many whales as possible. I have yet to hear any conclusions from that encounter.

Overall, we are aware of two births for the 2022 census, J59, a female (still unnamed) born in February to J37, named Hy’shqa, and the new K pod calf, K45, born to Spock. SR3 researchers reported earlier that two other females in K pod seemed to be pregnant and should have given birth by now if things went well. They are K12, a 52-year-old named Sequim, and K27, a 28-year-old, named Deadhead. (For names and some life history, see “Meet the Whales” by The Whale Museum.)

The endangered Southern Resident orcas rely largely on Chinook salmon for their food supply, although they will eat other fish at times. Unfortunately, Chinook populations have not rebounded from the significant declines of past decades, despite the listing of Chinook as a threatened species under the Endangered Species Act.

Several studies have shown a strong relationship between food supply and survival. Following periods of time when Chinook are more plentiful, whales survive at a higher rate and more females have successful pregnancies. But when Chinook are sparse, the whales seem to grow thinner, more animals die, and fewer females produce offspring.

Finding ways to increase the population of salmon, particularly Chinook, has been the goal of fisheries managers for years. Millions of dollars have been spent on habitat restoration along with removal of blockages to salmon migration. In recent years, the Department of Fish and Wildlife has even boosted hatchery production of Chinook (PDF 1.7 mb) to help the whales, despite concerns about the effects on wild Chinook. Removal of dams on the Elwha River has raised hope for some salmon recovery, and even greater expectations have been expressed for the possible removal of dams on the Snake River, which feeds into the Columbia River.

Meanwhile, it has been shown that vessels, both large and small, can affect the orcas’ ability to locate and catch salmon. For one thing, underwater noise seems to disrupt the whales’ ability to find and pursue prey through echolocation, which involves sending out high-frequency sounds and listening for reflections.

Although nothing would serve the whales better than an overall abundance of salmon, I thought Rob Williams of the research group Oceans Initiative put the matter into proper perspective at this year’s Salish Sea Ecosystem Conference:

“Effectively, noise is a problem because lack of Chinook salmon is a problem,” he explained. “If there is not enough salmon available in the environment, vessel noise and disturbance will reduce the amount of prey that is accessible to the whales.

“The population consequences of noise,” he said, “will look just like an exaggerated effect of prey limitation.”

I included this comment in my story covering a series of conference presentations focused on the effects of vessel noise and efforts to reduce the impacts on Southern Resident killer whales. See “Placing microphones on orcas offers a point-of-whale perspective on underwater noise” in the Encyclopedia of Puget Sound. 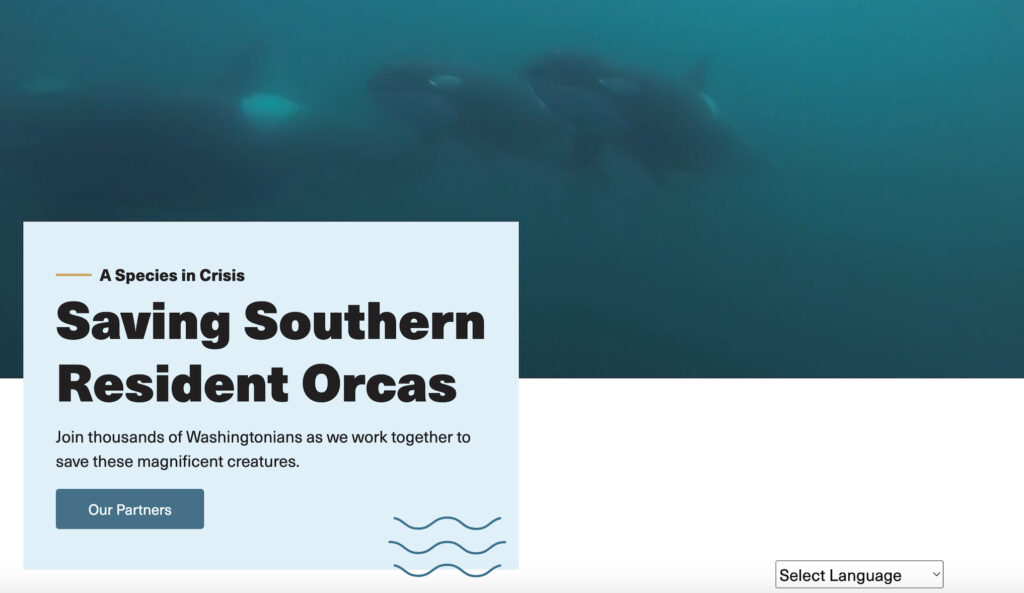 A new website launched by the Governor’s Salmon Recovery Office provides ongoing information about the Southern Residents and recovery efforts on their behalf.

The section “Orca 101” provides lots of basic information with online links to other resources. The “Progress” section tracks efforts related to 49 recommendations by the governor’s Southern Resident Killer Whale Task Force. Other sections include links to news stories and actions for people to take.