Early effects of a warming Earth have reached Washington state, as we can see from actual measurements. Annual snowpack is declining in the mountains; ancient glaciers are shrinking; sea levels are rising; and coastal waters are becoming less hospitable to sea life.

These are some of the changes outlined in a new easy-to-read briefing report titled “Shifting Snowlines and Shorelines” by the Climate Impacts Group at the University of Washington. The report is designed to bring a clear message to leaders and citizens of Washington state regarding where we have come with respect to climate change and where we may be going.

“We are seeing the consequences (of warming), even at the local level,” said Amy Snover, director of the Climate Impacts Group. “The impacts are only expected to worsen over time.” 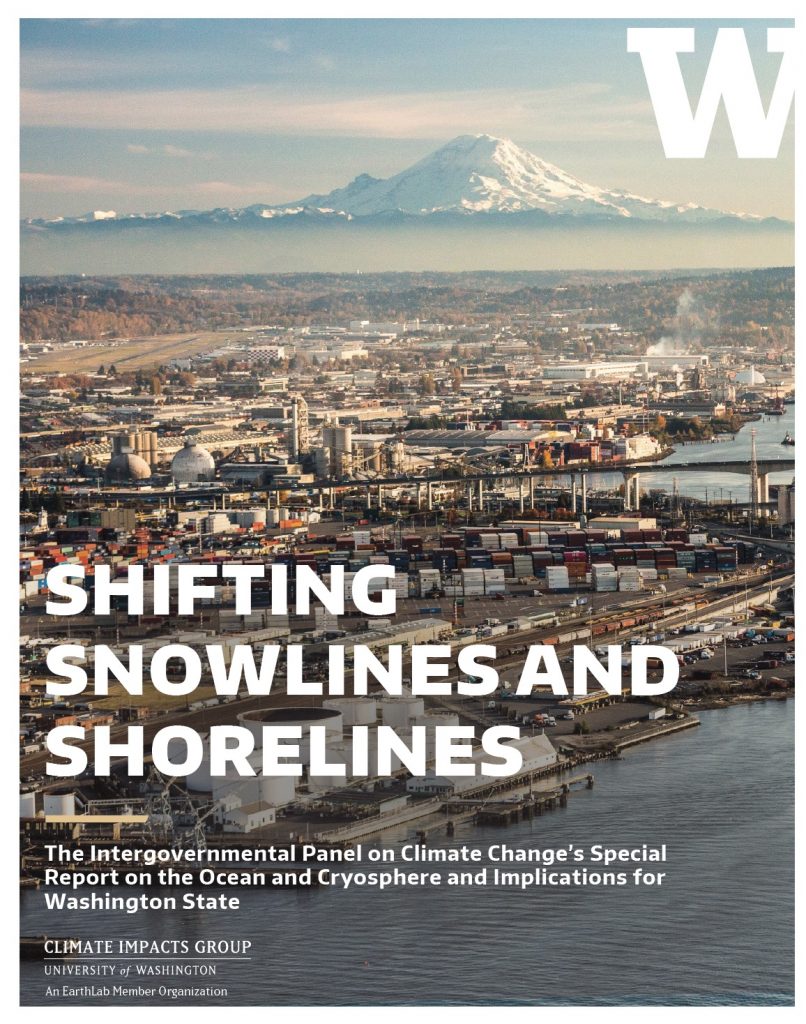 Amy stressed the “urgent need” to do what we can to reduce the amount of warming caused by greenhouse gas emissions. At the same time, she said, people must address the problems being seen now and prepare for worse conditions in the future.

The new briefing report is a localized summary of the “Special Report on the Ocean and Cryosphere in a Changing Climate,” a 755-page report issued in September by the Intergovernmental Panel on Climate Change (IPCC). The target audience of the new brief, Amy told me, is primarily decision makers, including officials at all levels of government.

Among the findings listed in the brief for Washington state:

The decision to write a localized brief about sea levels and the cryosphere (frozen parts of the Earth) resulted from acclaim for the Climate Impact Group’s previous briefing, called “No Time to Waste,” which followed the IPCC special report on what people will be facing if global warming reaches 1.5 degrees C (2.7 degrees F) above pre-industrial levels. See the 616-page document “Global Warming of 1.5° C.”

For Washington state, “No Time to Waste” provides some numerical forecasts for hotter days, reduced snowpack, higher winter streamflows, lower summer streamflows and sea level rise. Predictions were derived from years of research in the Northwest along with relevant research from other regions.

“By mid-century, if greenhouse gas emissions continue on their current pathway, the average year in Washington will be warmer than the hottest year of the 20th century,” the brief states.

If greenhouse gas emissions stopped today, the 1.5-degree limit set by the Paris Agreement would not be exceeded. However, an immediate halt to emissions is impossible, of course. We are, in fact, getting close to locking in at least a 1.5-degree rise along with drastic consequences.

Amy Snover sees a growing recognition of the climate-change problem as well as growing support for action. In fact, actions have begun in Washington state to reduce greenhouse gases and to address the anticipated problems, she said.

“That’s the happy secret of climate change,” Amy told me. “There is more happening than most people know. That being said, it isn’t really enough. It’s just the beginning, and a lot more needs to be done.”

Local governments are beginning to plan for higher water levels, as I described in a 2017 story for the Encyclopedia of Puget Sound. Many waterfront property owners also are beginning to consider their options, as I reported in a separate story.

Sea-level rise depends on two factors: how fast the oceans rise and the rate of vertical land shifts. A sophisticated analysis of these two factors in Puget Sound and along the Washington Coast give us a good idea of what we are facing under various climate-change scenarios. Check out “Projected Sea Level Rise for Washington State” (PDF 10.4 mb).

One of the great values of this analysis is that we can look at the probabilities that certain sea levels will be reached at certain times under various climate-change scenarios. We can choose just about any location by pointing to a map of Washington state, as I explained in a Water Ways blog post in August 2018. For example, I listed the projected sea-level rise in 2050 for various locations, using a 50 percent probability and a high greenhouse gas scenario:

For other stories about the local impacts of climate change, please check out the Encyclopedia of Puget Sound’s sections on:

Changes were made to an earlier version of this blog post to clarify the opening sentence, the first quote by Amy Snover and the effect of an immediate halt to greenhouse gas emissions.