A North Pacific research expedition is underway, with projects said to be bigger, bolder and more scientifically sophisticated than cruises in 2019 and 2020.

Four research vessels carrying more than 60 scientists from various countries will span out across the Pacific Ocean to increase their understanding of salmon — including migration, environmental stresses, availability of prey and risks from predators. Researchers aboard a U.S. ship operated by the National Oceanic and Atmospheric Administration left from Port Angeles this morning.

There has never been a research cruise as involved as this expedition, scheduled from now into April, according to Laurie Weitkamp, chief U.S. scientist for the 2022 Pan-Pacific Winter High Seas Expedition. The geographic reach is much larger than during similar expeditions in 2019 and 2020, Laurie told me. Advanced research equipment will help to improve data-gathering, and the analyses are growing ever more sophisticated.

Many salmon populations in the North Pacific have been declining since the 1990s. An important goal of the expedition is to better understand how physical and biological conditions can affect marine survival, especially during this critical winter period. Understanding the causes of poor marine survival could lead to better management of the ocean resources, experts say.

It will be interesting to follow the movement of the four ships in real time, as displayed on the Live Vessel Tracking Map.

In addition, anyone interested can learn about shipboard activities as they are reported on social media:

“It is incredibly exciting to be part of such an amazing scientific expedition,” said Weitkamp, a salmon biologist with NOAA’s Northwest Fisheries Science Center in Newport, Ore. “This is definitely a once-in-a-career opportunity, and I am really looking forward to all the discoveries we will collectively make. It’s been a long road putting it all together, but I am confident this cruise will change how we think about salmon in the ocean. It’s Darwin’s voyage of the Beagle of our time.”

“This is an exciting time for salmon science,” agreed Brian Riddell, science adviser for Canada’s Pacific Salmon Foundation. “For the first time in decades, international cooperation across the North Pacific will provide an invaluable snapshot of salmon distributions, their health, and their environmental conditions in these times of changing climate. I expect these results will be foundational as we also begin a much larger study under the United Nations Decade of Ocean Science.”

For these and other prepared statements, check out the news release about the expedition.

The research fleet for the 2022 expedition consists of the NOAAS Bell M. Shimada from the United States, the CCGR Sir John Franklin from Canada, the RV TINRO from Russia, and a Canadian commercial fishing vessel, the FV Raw Spirit. This year’s expedition was originally planned for last year but was delayed because of COVID-19.

To cover a major section of the ocean, the ships will travel in strategic patterns within assigned zones, as shown on the map above.

The North Pacific expedition involves a variety of government, academic, industry and non-governmental groups. It is part of a five-year endeavor called the International Year of the Salmon, which strives to understand the role of salmon in a worldwide ecosystem affected by human activities. The hemispheric partnership is led by the North Pacific Anadromous Fish Commission and the North Atlantic Salmon Conservation Organization.

Some areas of study:

Distribution of various salmon species: A key question has been where the salmon can be found at various times and places in the ocean. After the 2019 expedition, researchers were raising questions about the location of pink salmon, because so few were caught in deep waters where more had been expected, as I reported in Our Water Ways, March 22, 2019. On the other hand, the researchers had expected to catch fewer coho than they did that year, because they thought coho would be closer to the coast.

In 2020 (without U.S. scientists because of COVID), the research vessels found more pink and chum salmon early in the expedition than they did later in the same area, suggesting that the fish were schooling more than expected from previous Russian studies. See Our Water Ways, April 9, 2020.

Also, besides covering more area of the ocean at one time, the researchers will deploy gillnets as well as trawl equipment to see whether different types of fishing gear catch different fish in the open ocean. Varying environmental conditions during all three years of research could help to identify what causes the fish to move to particular places.

Expanding use of environmental DNA: The technique of identifying what species are present in a given area by testing for DNA in the water has undergone major advancements. Now, thanks to a more extensive genetic baseline, researchers are able to identify many different populations of salmon as related to their streams of origin. Studies in 2019 and 2020 showed that the presence of salmon observed by using eDNA techniques was quite similar to the actual fish caught in the nets.

These eDNA techniques also can determine the presence of species that only come to the surface at night, such as squid, or species that tend to avoid the ships, such salmon sharks and Dall’s porpoises, noted Christoph Deeg, postdoctoral fellow at the University of British Columbia, explaining the preliminary results from the 2019 and 2020 expeditions during an online seminar. Using eDNA to locate species that eat salmon, compete with them for prey, or provide them nutrition can help define the dynamic interactions taking place in the oceanic food web. Check out the online seminar featuring Deeg and Kristi Miller-Saunders, head of molecular genetics at Canada’s Department of Fisheries and Oceans.

Health and condition of salmon: The health of the salmon can be judged in part by their size at a certain age. In 2019, chum salmon seemed skinny and their stomachs were often empty, compared to coho salmon which seemed in better shape. The question of where the coho were finding prey not consumed by chum remained an open question. Measuring salmon stomach contents and analyzing fatty acids will continue to provide clues about what different salmon are eating. 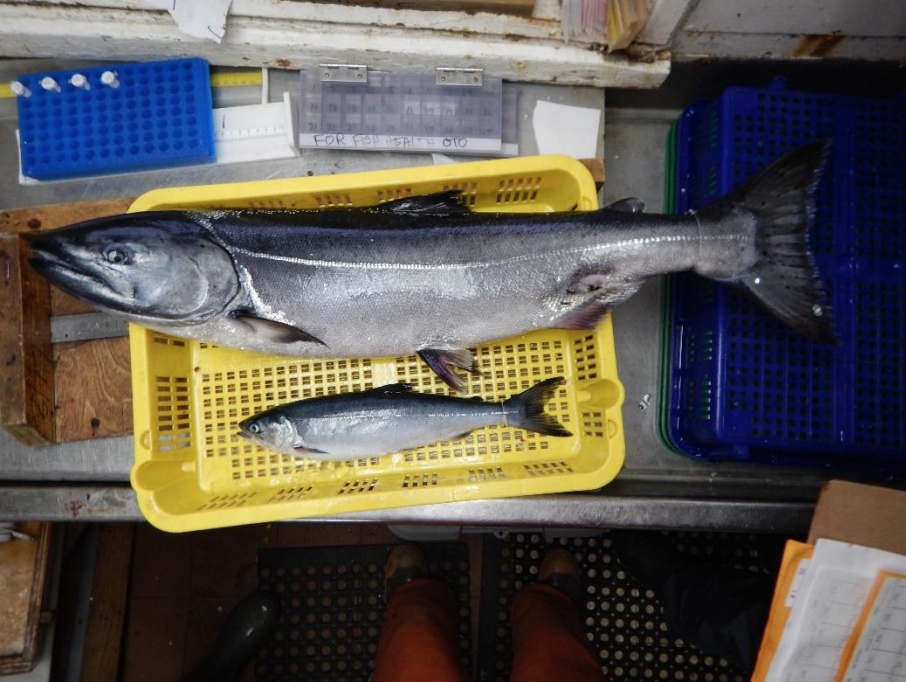 New genomic techniques are being used to screen for pathogens in salmon, including a variety of bacteria and viruses. Non-lethal sampling involves using a swab on salmon gills, not unlike testing for the COVID virus in humans, according to Kristi Miller-Saunders. Preliminary analyses from the 2019 expedition revealed 21 pathogens in coho, chum, pink, and sockeye salmon.

Genetic techniques also can be used to identify chemicals produced by salmon under stress, with specific biomarkers determining the type of stress: temperature, low oxygen, viral disease and so on. The expedition is expected to result in the most comprehensive study of salmon health ever conducted in the winter, leading to insights into ocean mortality among salmon.

Ocean conditions: Besides traditional equipment that can measure ocean temperature, salinity, oxygen levels and other measures, the 2022 expedition will deploy underwater gliders, shaped like torpedoes, which monitor conditions as they move along. Gliders can be equipped with active and passive acoustic sensors to help locate marine creatures with sonar and identify species by the sounds they make. (Read the article by Caroline Graham, including glider routes, on the Year of the Salmon website.) Expedition ships also will deploy Argo floats that will drift with the currents and record various water quality data, including oxygen levels.

Plankton production and distribution: Since phytoplankton form the base of the food web, it is important to understand what limits their growth. Measuring levels of different types of phytoplankton and the surrounding physical conditions — from temperature to trace metals to stratification — could help explain the factors that limit primary production and ultimately the food for salmon. Studies of what drives the growth and consumption of different types of zooplankton in the ocean is another important piece of the puzzle.