As Washington state authorities get ready to ban the chemical bisphenol A (BPA) from drink cans and customer sales receipts, the U.S. Food and Drug Administration has agreed to take a fresh look at the potential dangers of BPA.

Washington Department of Ecology has issued its “Regulatory Determinations to the Legislature,” which specifies that safer chemicals are available and could be banned from a dozen applications where toxic chemicals are widely used — from flame retardants in electronic equipment to stain-resistant compounds in carpets. Coming next are actual regulations to force manufacturers to make changes, as I will describe later in this blog post.

Organized groups of physicians, scientists and public-health advocates have been complaining for years that the FDA’s allowable levels of BPA are much too high. They say the FDA’s analyses are based on incomplete scientific studies, in part because of agency protocols used to decide what types of studies are acceptable.

One point of contention is whether different biological effects can be seen at especially low doses of BPA, as I described briefly in Water Ways three years ago. See also “More Bad News for BPA” in Environmental Health Perspectives.

Concerns about BPA’s effects on the immune system have risen to high levels among some scientists, as new studies keep coming. BPA has long been suspected of causing reproductive and developmental problems because of their potential as endocrine-disrupting chemicals.

The FDA’s decision to take a new look at BPA came about from a petition filed by a coalition of health advocates, including the Environmental Defense Fund, Endocrine Society, and Consumer Reports. The game-changer in the process is a new assessment of BPA’s toxicity by the European Food Safety Authority (EFSA), which has proposed a new rule to drastically lower the allowable exposure to BPA. 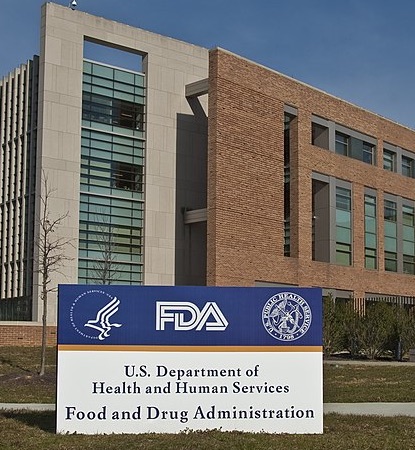 EFSA’s latest evaluation follows an overhaul of the agency’s protocols to determine which studies should be included and which should be excluded in the overall evaluation of BPA toxicity.

The latest petition to the FDA calls for the agency to withdraw its approval of BPA in adhesives and coatings and to restrict the amount allowed to migrate from food packages and from manufacturing processes into food for human consumption.

“The process EFSA used to reassess the safety of bisphenol is a template for how FDA should be doing it for the hundreds of chemicals it approved decades ago — transparent, thorough and grounded in the science,” Tom Neltner, the EDF’s senior director for safer chemicals, said in a news release.

As stated in the petition, “Using FDA’s own exposure estimates, the average American is exposed to more than 5,000 times the safe level … set by the EFSA Expert Panel. Without a doubt, these values constitute a high health risk and support the conclusion that uses of BPA are not safe.”

The petition, revised with new information, “will force the FDA to respond to the December EFSA findings with the new scientific opinion and proposed rule reevaluating risks posed by consumption of BPA in food,” according to a news release from the Environmental Working Group, another petitioner. “EFSA concluded there is no longer a reasonable certainty of safety with dietary exposure.”

As the FDA ponders whether to revise its safety standards for BPA, the Washington Department of Ecology is addressing toxicity concerns in a totally different way under the Safer Products for Washington law.

The process considers the use and risks of toxic chemicals and whether a safer alternative is feasible and available for that use. Before restricting the use of a chemical, state experts must show that an acceptable alternative will reduce the use of the chemical or its related health effects, as provided in state law. There is no need to determine a “safe” level once the toxicity is firmly established.

For BPA and similar bisphenols used in the linings of cans to prevent corrosion, Ecology has identified safer alternatives that work with drink cans, but not with food cans.

“Food and drink cans have many different properties and performance needs,” states the determinations report. “These differences affect the composition of the lining, so the safer alternatives we identified for beverage cans are not applicable to food cans. We identified bisphenol-free food can linings, but without a transparent list of ingredients, we could not evaluate their hazards.”

For food cans, Ecology has proposed a reporting system that could produce a better picture of the chemicals used and the concentrations in different products.

Manufacturers claim that BPA and its toxic relatives have been removed from nearly all food cans, which should mean less toxicity. But the compound still shows up in some products, particularly those from other countries, so there’s still some concern. See Water Ways, June 10, 2021.

Many “thermal papers” — including receipts, tickets and labels — can expose people to low levels of BPA and similar compounds every time they simply touch the papers. Retail workers who hand out receipts time after time in a checkout line have been shown, on average, to have higher levels of bisphenols in their bodies than the general population.

In the printing process, these chemicals add color to the paper using a heat process. Safer printing methods are available that don’t use thermal paper, so a phase-out is under consideration, according to the Ecology report.

Other restrictions, as proposed by Ecology:

Organohalogen flame retardants used in polyurethane foam mats and outdoor recreational products can often be eliminated, since most products can meet state and federal flammability standards without the added chemicals. Restrictions on their use are proposed.

Per- and polyfluoroalkyl (PFAS) chemicals used for stain-resistance in leather and textured-fabric furniture can be replaced with inherently stain-resistant fabric or cleanable materials, or the furniture can be designed with removable and washable upholstery. These ideas may not be feasible for outdoor furniture, so the restrictions are proposed only for indoor furnishings.

Per- and polyfluoroalkyl (PFAS) chemicals used in carpets and rugs can be replaced with safer chemicals or with alternative floor treatments without the use of carpeting, so restrictions are proposed.

Per- and polyfluoroalkyl (PFAS) chemicals contained in “aftermarket” products for stain and water resistance can be replaced with safer chemicals or avoided altogether, so restrictions are proposed.

Alkylphenol ethoxylates used in laundry detergents to help clean clothing and linens can be replaced with safer surfactants, so restrictions are proposed.

Ortho-phthalates used to add flexibility to vinyl flooring can be replaced with safer plasticizers. In fact, Ecology investigators found most flooring manufacturers have already moved away from these chemicals, so restrictions are proposed.

Ortho-phthalates used in fragrances and personal-care products to preserve scents can be replaced with a variety of safer alternatives.

The next step is to come up with specific state regulations to put these regulatory determinations into action. Ecology must issue a preliminary draft rule, a formal draft rule, an economic analysis, and a final rule.

Anyone interested may get involved at any step in the process. Two three-hour webinars are planned this month to bring everyone up to date. One is on June 28 at 10 a.m., and the other is on June 29 at 5:30 p.m. To join the Zoom meeting, simply click on the link at the appropriate time.

To gather information, ask questions or make comments, one can start at the public comment page or visit the Safer Products stakeholder page.

“At these first kick-off meetings, we’re hoping stakeholders will share details about what they are experiencing and any challenges, so we can incorporate as much input as possible in the first iteration of the draft rule,” said Lauren Tamboer, communications consultant for Ecology’s Hazardous Waste and Toxics Reduction Program.

“We encourage stakeholders to review other regulations addressing similar products and chemicals and bring (to the June events) suggestions of concentration limits, compliance timelines, and other details we should consider when developing the draft rule,” Lauren said in an email. “We plan to spend the next several months in discussions with our stakeholders and the public to develop the specifics of these regulations. There will likely be additional events this summer as we develop the draft rule and begin to share language with our stakeholders.” 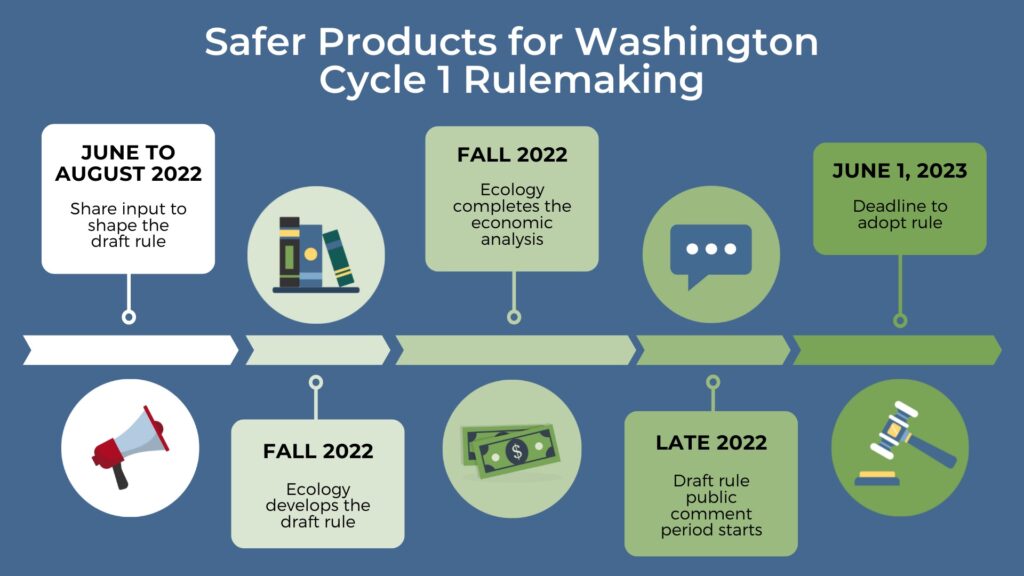