The Hood Canal Bridge, which connects the Kitsap and Olympic peninsulas, has proven to be a dangerous impediment to juvenile steelhead trout. As many as half of the young migratory steelhead in Hood Canal may get picked off by seals, birds and other predators as the fish try to pass under the floating highway, according to studies. 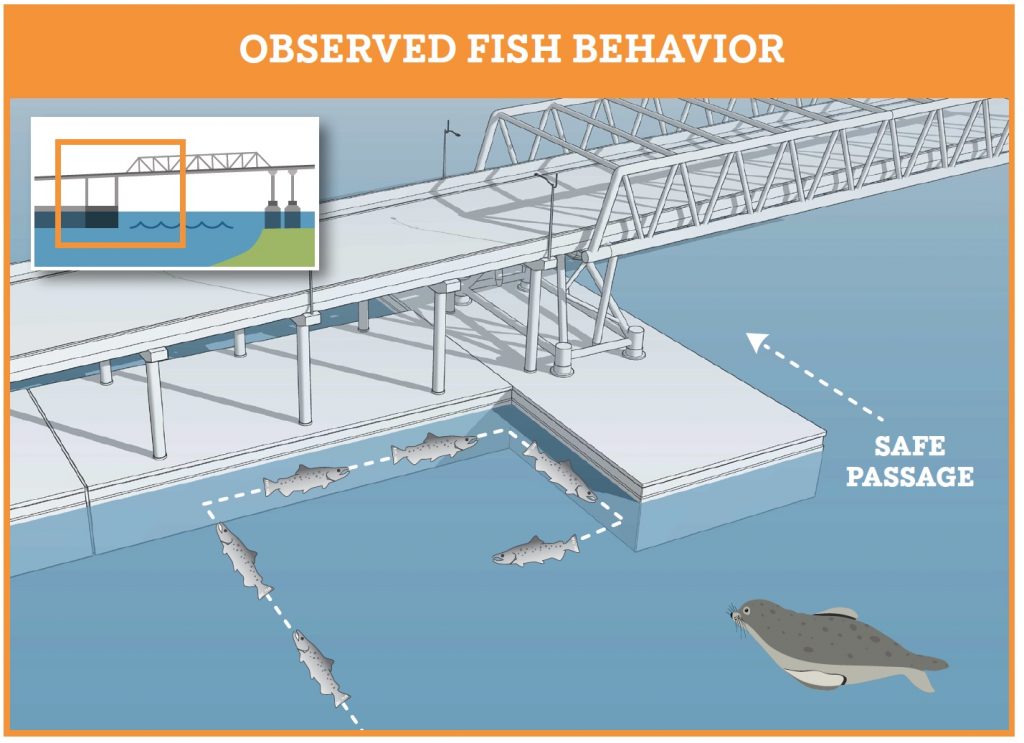 While a permanent solution may be years away, the first step at reducing predation at the bridge may be just around the corner, as construction crews prepare to fabricate a floating structure that could help the fish swim past the bridge with fewer delays.

The new floating structure — the first of four being planned for the bridge — is designed to fill in one of the sharp corners where concrete pontoons form a 90-degree angle, creating something of a temporary trap for the migrating fish. Construction of the so-called fish-guidance structure is scheduled to get underway in November. When completed in the spring, the structure will be moved to the Hood Canal Bridge, where researchers will study how well it works to smooth the way for safer fish passage.

“I am really excited to see what this does,” said Lucas Hall, associate director of special projects for Long Live the Kings, who has helped coordinate the project since its inception. “There are not many times when you can identify something that is killing 50 percent of the juvenile population. The ripple effects could be pretty phenomenal.”

The stakes are high, as Puget Sound steelhead are listed as threatened under the Endangered Species Act and considered in “critical” condition by the Governor’s Salmon Recovery Office. Efforts to recover steelhead populations have been only minimally successful in some locations.

While two studies have documented the deadly effects of the bridge on out-migrating steelhead (Moore, PLOS One, 2013, and Moore, Ecosphere, 2022), some evidence suggests that the bridge may also be impeding other young salmonids as well. The latest study is looking into the effects of the bridge on returning adult salmon, including Puget Sound Chinook and Hood Canal summer chum, both listed as threatened. Megan Moore of NOAA’s Northwest Fisheries Science Center who led the steelhead investigations, is expected to provide preliminary results next year.

For juvenile steelhead leaving Hood Canal, Moore and other observers studying fish behavior say the fish tend to swim near the surface. When they reach the bridge, a significant number turn and follow the solid line of floating pontoons rather than diving under them. Some fish may eventually pass through a wide opening in the pontoons — one at each end of the bridge where smaller boats pass through without disrupting traffic on the bridge.

Just before the fish swim through the opening, they encounter the treacherous 90-degree angle formed by pontoons supporting the wide span. It is here that fish seem to become confused, and many turn back, leading to higher densities of fish that can be spotted and more easily taken by predators, according to reports.

In engineering terms, the structure to be built is a “fillet” (pronounced FILL-it), a word that refers to an object or material that fills in an inside corner of a structure. In aeronautics, fillets are used to reduce air turbulence around the body of an airplane. At the Hood Canal Bridge, the hope is that fillets can reduce the eddies that form in the corner and smooth the water flow, thus allowing fish to continue on their way.

It will take four triangular fillets to fill in the four major corners where fish get delayed before passing under the bridge. The Legislature provided the project $3.6 million, which was expected to cover the cost of two fillets, according to early estimates. But when the bids came in, the cost to design, build and install a single fillet was nearly $2 million — largely because of higher material costs — so the project was scaled back to one fillet.

Money left over might be used for a second fillet, with some additional funding, or the Legislature could be asked to reallocate the surplus for future construction in the next legislative session, according to Shaara Ainsley, senior project manager for Long Live the Kings.

As designed, the first fillet will be built mostly of high-density polyethylene (HDPE), a strong plastic used in many building materials. Large 28- and 20-inch HDPE pipes will be connected together with 12-inch HDPE pipes and other materials to form a three-dimensional structure that can be lashed to the bridge. It will be about 60 feet along the two sides adjacent to the bridge and 85 feet along the face — the hypotenuse of the triangle.

To allow for transport by semitractor-trailers, the structure will come apart into 11 pieces. The first installation will be at the east-end opening in the pontoons. Once the structure is in place, water will be added to some of the pipes to attain the proper buoyancy and stability. Approaching the structure, fish will encounter a flat sheet of inch-thick HPDE, which they can follow until reaching the open area to pass under the bridge. A net around the top is designed to prevent seals and sea lions from climbing onto or over the structure.

The first fillet is being built under contract to Global Diving and Salvage of Seattle, with design and engineering by Kleinschmidt Associates of Pittsfield, Maine, along with Art Anderson and Associates of Bremerton. Pacific Netting Products of Kingston is involved in the fabrication.

The plan is to truck the structure from Kingston to the Duwamish Waterway in Seattle, from where it will be floated around the Kitsap Peninsula to the Hood Canal Bridge.

Researchers with the Port Gamble S’Klallam Tribe will be using underwater video and other monitoring equipment to see how fish respond to the new structure. By removing the structure every other week for six weeks, they hope to compare changes in fish behavior and predation risks with and without the structure. Other monitoring will involve acoustic transmitters placed in juvenile steelhead, allowing researchers to track the fish via receivers placed strategically along the migration route and at the bridge.

With only one of the four inside corners addressed with a single fillet, researchers may be unable to measure any decline in mortality brought about by the treatment, Hall said. But the potential of observing changes in fish behavior when the structure is in place is exciting to contemplate, he added. If the experiment is successful, the hope would be to build additional fillets to multiply the success.

While the fillets may address the perilous inside corners of the pontoons, turbulence also can be found at the sharp outside corners of the pontoons, according to a 2020 report (PDF 35.5 mb) that proposes solutions to a variety of problems identified at the bridge. Check out the seven-page summary (PDF 6.3 mb) of the report on the Long Live the Kings website, along with the latest information about the project. (Full disclosure: I helped write the summary report.)

Long-term solutions at the Hood Canal Bridge might include restructuring the entire support system to provide spaces between the pontoons where fish can swim through, according to options discussed in the bridge report.

Fish are not the only issue at the bridge, Hall said. Other concerns include the importance of U.S. Navy submarine traffic, ongoing vehicle and pedestrian safety, and the increased importance of the bridge during a disaster, when emergency traffic flow or evacuations become a challenge. Given new federal money appropriated by Congress for infrastructure improvements, perhaps bridge upgrades could be approved to benefit people as well as endangered salmonids, Hall said.

Further discussions should involve all aspects of the bridge, he continued, so when the time comes to replace the entire bridge or some of its structural components, advance planning will already be done.