Salmon need cold water. This general statement is something I’ve been hearing since I first began reporting on these amazing migrating fish years ago. Cold water is a fact of life for salmon, known for their long travels up and down streams, out to saltwater and back. But colder is not always better.

Questions about why salmon need cold water and how their habitat might grow too warm or too cold led me into an in-depth reporting project. I ended up talking to some of the leading experts on the subject of stream temperature. Thanks to their fascinating research, I learned that temperature and food supply go hand-in-hand to dictate salmon metabolism, growth and survival. You can read my report, “Taking the Temperature of Salmon,” in the Encyclopedia of Puget Sound.

Later in this blog post, I will touch on some new developments regarding temperature and stream conditions — including Gov. Jay Inslee’s latest initiative to help salmon by proposing new laws and regulations along with $187 million in next year’s budget request.

In the Northwest, we almost never need to worry that salmon streams will get too cold. Logging, farming and development have removed large amounts of streamside vegetation, allowing the sun to warm the waters, often to excessive degrees. While sunlight can increase the growth of tiny organisms and boost the food web, higher temperatures also accelerate metabolic rates, increase stress hormones and alter behavioral responses, as I described in my story.

When a section of a stream grows too warm, fish will seek out cooler water, often by swimming upstream to areas cooled by springs or snowmelt. As a change in temperature alters metabolism and behavior, the result can be problems with finding food and with increased threats of predation.

“Anybody who does stream work soon learns that fish are amazing,” Jonny Armstrong, a University of Oregon researcher, told me. “They don’t just accept the habitat they are given; they do all kinds of things to game the system.”

Jonny’s work in Alaska documented how a run of coho salmon moved into cool water to feed on sockeye salmon eggs. After getting their fill, the fish returned to warmer water to digest the food and grow faster.

I’m especially indebted to Aimee Fullerton, who helped me understand a multitude of biological processes related to temperature, as I searched for ways to explain the complex findings. Aimee is a research fishery biologist with NOAA’s Northwest Fisheries Science Center. She has been working in the Snoqualmie River, where temperatures grow warm enough at times to impair the growth and development of salmon and sometimes kill them if they cannot escape into cooler waters.

The prospects of climate change raise concerns about even higher temperatures in the future. Careful temperature measurements, combined with computer modeling, have helped researchers predict future temperature changes. Other experts are developing new strategies for maintaining cooler temperatures to protect salmon, as I outlined in the story.

Just last week, Washington Gov. Jay Inslee announced a new initiative that he will take to the Legislature next year. He hopes to boost salmon populations by improving stream habitat, replacing culverts and other impediments, and cleaning up polluted waters. Inslee also intends to address harvest, hatcheries and hydropower along with critical issues of predation and food availability.

“There is no time to waste,” the governor said in a news release. “We have a choice between a future with salmon or a future without them. Salmon need immediate and urgent action to ensure their survival. That’s why, for the 2022 legislative session, salmon recovery is a top priority and have both policy and funding to help protect them.”

One of the key ideas that the governor mentioned during his news conference on Tuesday is to build and/or protect streamside corridors based on the height of trees, which provide shade to cool streams. (See video, embedded on this page, at 11:03-14:30.) The riparian corridor is also important in reducing toxic pollutants, bacteria and fine sediments that enter a stream.

The so-called Governor’s Salmon Strategy Update (PDF 1.4 mb) includes provisions for riparian buffers on agricultural lands, which has been a concern of Indian tribes throughout the region. Details have yet to be proposed, but a combination of regulations and financial support are likely.

The latest initiative grew out of the 2019 Centennial Accord meeting between state agencies and tribal salmon experts led by the Northwest Indian Fisheries Commission.

“This is the first time we have seen legislation that would require landowners to protect riparian habitat,” said Dave Herrera, NWIFC commissioner and Skokomish Tribe policy representative who was quoted in a news release. “It is also groundbreaking because it includes incentives for landowners to create and maintain riparian zones, as well as regulatory backstops when compliance isn’t voluntary.” 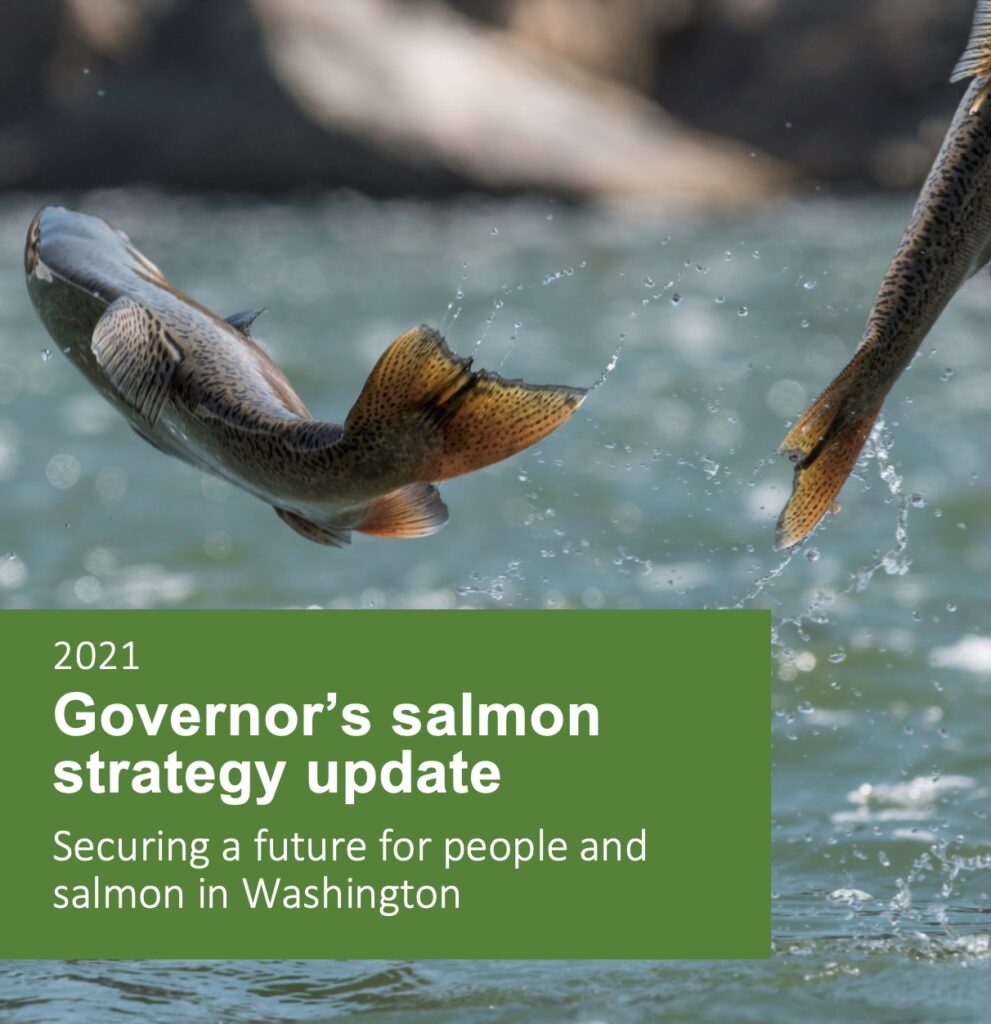 Next year’s salmon-recovery legislation will be called the Lorraine Loomis Act, named for the late chairwoman of the Northwest Indian Fisheries Commission who promoted cooperative efforts to save salmon. Budget details are included in a policy brief (PDF 1.4 mb) released by the Governor’s Office.

“We know the status quo isn’t working when it comes to salmon recovery,” Lorraine wrote in a column last year. “We know what the science says needs to be done, and we know that we must move forward together.”

On the regulatory front, the federal Clean Water Act calls for standards that protect aquatic life, such as salmon. Where temperatures are not maintained within an approved range, the waters are considered “impaired” — just as they are when bacteria become too numerous or oxygen levels drop too low for the aquatic species of concern.

Although I did not address regulatory issues in my story about temperature, it is worth noting that numerous federal and state clean-water regulations are undergoing changes. Some changes are the result of lawsuits; some follow statutory requirements; and some stem from the coming and going of the Trump administration’s efforts to reduce environmental rules.

For example, the Environmental Protection Agency recently withdrew its approval (PDF 402 kb) for how the Washington Department of Ecology handles high temperatures in certain stream segments that grow naturally warm. The basic idea is that regulatory agencies need not seek out mitigation measures to cool such waters — even in areas too warm for salmon — if it can be shown that high temperatures represent the natural condition of the streams and that humans are not to blame.

The group Northwest Environmental Advocates first brought a lawsuit over such “natural conditions criteria” in Oregon, where NWEA contended that the state was allowing streams to remain dangerously hot by discounting the effects of humans. In this way, the group argued, Oregon was establishing new and higher temperature standards than allowed by existing regulations without going through a public review process. The higher temperatures should be subject to public review and federal oversight, including effects on endangered species, the group said. Federal courts agreed with that reasoning.

Although the Washington Department of Ecology rarely invokes natural conditions criteria for temperature, it must now review its practices and undergo federal oversight where experts believe that the natural condition of a water body would exceed established water-quality standards. Besides temperature, the review will cover criteria for dissolved oxygen. In some areas of Puget Sound, Ecology has determined that numerical water-quality standards would not be met even if no humans were around.

The methods of determining what the water temperature or oxygen level would be in the absence of human activity can become an elaborate exercise involving computer modeling. But Nina Bell, executive director of NWEA, argues that the process is important and should be open to public scrutiny. After all, she said, the outcome can determine whether unhealthy temperatures or oxygen levels persist or are reduced through mitigation efforts.