UPDATE, TUESDAY, MAY 17 / WEDNESDAY, MAY 18
Environmental review has been completed for the draft 2022-2026 Puget Sound Action Agenda, and the Puget Sound Partnership announced a public comment period for the SEPA checklist (PDF 818 kb) and determination of nonsignificance (PDF 134 kb), as required by the State Environmental Policy Act. Comments will be taken until May 30, as described in the DNS.

Also, the revised Vital Signs and their indicators are described by the Puget Sound Partnership in a May 18 news release.
—–

As the Puget Sound Partnership nears completion of a revised four-year plan for restoring the Puget Sound ecosystem, a new set of recovery goals, known as targets, has begun to emerge. 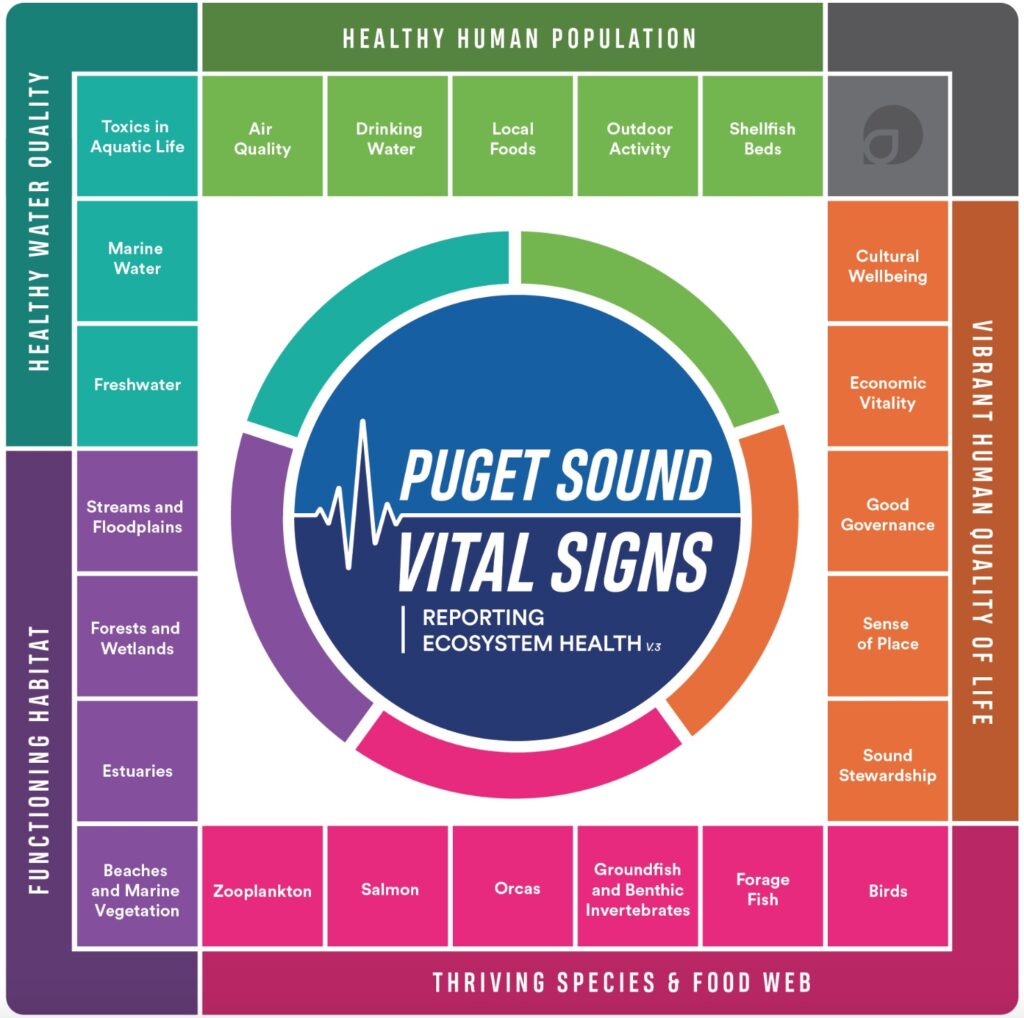 Unlike previous targets, the new ones so far are all reflective of ecological indicators, measuring ecosystem conditions. Those established more than a decade ago were a mix of two types of goals: those related to ecosystem condition — such as the number orcas thriving in Puget Sound — and goals related to recovery efforts — such as removing old bulkheads faster than new ones get built. The old targets were to be met by the year 2020. I’m told that future targets could include human endeavors.

In the next Action Agenda, future “progress indicators” (PDF 2.2 mb) are defined as measures of human activity and behavior “believed to have the greatest impact on one or more Vital Sign indicator targets…” These progress indicators, scheduled for attention later this year, can be used to track implementation efforts, assess barriers to progress and identify needed changes in implementation planning.

In addition, “program targets” (PDF 1.6 mb) have been identified. They are directed at ongoing programs managed by various agencies. These short-term targets are designed to help track and evaluate progress within programs established to improve ecological function. Eleven such targets are identified in the proposed Action Agenda (and listed below).

“You can see an evolution of the targets in all directions,” said Kirsten Feifel, manager of the Adaptive Systems Program at the Partnership, discussing the changes in the new Action Agenda. Some targets, she said, are more or less a continuation of previous targets; some call for greater improvement; and some reflect a more realistic outcome for goals that are off track.

Work to establish new targets for ecosystem indicators along with other measures of progress will extend through next year, as experts work together to identify the best ways to report accomplishments and describe the current state of the ecosystem.

The next Action Agenda reflects an even greater effort to understand the process of ecosystem restoration — including breakthroughs in science, an appreciation for the complexity of natural systems, and an increased awareness of human values and interactions.

“Things are starting to come together in ways that haven’t been seen before,” Kirsten told me. “I think the great thing about the (new) Action Agenda is that it weaves together many parts.”

This will be the second Action Agenda that includes what is essentially two documents: a comprehensive plan, which sets out a vision for recovery and outlines a decision-making process, plus an implementation plan, which charts a specific course for the next four years.

A revised draft of the Action Agenda is scheduled to be available on the Action Agenda update page on June 1, in advance of scheduled approval by the Puget Sound Leadership Council on June 8. The March 15 public-review draft (PDF 3.9 mb), which has since undergone a variety of changes, is available for review but not comment.

Here’s a quick overview, with links, to the six Vital Sign targets to be included in the upcoming Action Agenda:

The Partnership’s 2020 target was to increase the number of whales by an average 1 percent per year, starting with 86 animals in 2010. Instead, the population dropped to 74, as of last year’s census.

While the situation remains bleak, there was a bright spot reported a few days ago, when a group called The Guide’s Forecast posted a video (this page) of a new calf born in K pod, one of the three groups of Southern Resident orcas. The Center for Whale Research, which maintains the official orca census, intends to confirm the sighting and assess the calf’s health over the coming days.

“This calf would be the first viable baby born into K pod since K44 in 2011,” states a notice on CWR’s website.

Much work is needed to recover the Southern Resident orca population, which has been affected by a decline in Chinook salmon, their primary prey, according to several studies. Restoring salmon runs is seen as a key to orca recovery, while other efforts are aimed at reducing noise and interference from vessels (which affect the whales’ hunting abilities) and reducing toxic chemicals (which pollute their food and affect their health).

The new target is a 1.25 percent growth rate, similar to goals established by the Governor’s Southern Resident Killer Whale Task Force (PDF 2.9 mb). Meeting that target would give us 86 individuals by 2030 and 110 by 2050. Achieving that goal would require a much higher survival rate than seen recently among calves born into the three pods.

The new target for 2050 follows the earlier one for 2020, based on a portion of the goals for the Puget Sound Recovery Plan, which is designed to avoid extinction and rebuild the Puget Sound Chinook population. Specifically to meet the target by 2050, all 21 individual Chinook populations need to be on the increase and 2 to 4 populations in each of the five biogeographic areas need to meet specified recovery goals.

The 2020 target was a 20 percent increase in the total area of native seagrasses (eelgrass and surfgrass) relative to the average for 2000 to 2008. While acreage data are limited, it appears that the total amount of acreage has been fairly consistent. Some sites have grown in size while others have shrunk, according to monitoring experts with the Washington Department of Natural Resources.

As the DNR reports, recent data show nine sites increasing in eelgrass and 32 decreasing, driven largely by surveys in the San Juan Islands and Strait of Juan de Fuca, where 19 sites have declined and none have increased.

The new 2030 target is no significant difference between the number of sites showing increases and the number showing declines in eelgrass area (no net loss). By 2050 the target is for areas with long-term increases to significantly outnumber sites with declines (net gain).

The 2020 target was to add 10,800 net acres of harvestable shellfish growing areas to Puget Sound starting in 2007. The actual increase was 6,659 acres, or an average 476 acres per year, thus missing the target. A favorable increase in growing areas was offset by new shellfish-harvesting restrictions over a large area of Samish Bay in northern Puget Sound.

The revised target of 500 net acres per year is based on an assessment of the acreage that could be restored to harvesting. This target is scheduled for an annual assessment.

“As an annual evaluation of the current activities within shellfish growing areas, this target allows for a more rapid response to changing conditions, when compared to the long-term 2020 stretch goal,” states an attachment (PDF 1.1 mb) to the Action Agenda.

The 2020 recovery target for the condition of swimming beaches was to have all the beaches that are monitored in Puget Sound to be up to par for health standards related to the bacteria Enterococcus. The number of beaches meeting the standard varies from year to year, depending on a number of human and environmental conditions, as shown in a Vital Signs Progress Report. While many areas have seen overall improvement because of increased efforts by water-quality inspectors, no year has seen a 100-percent favorable result. The average has been 85 percent.

The new target of 95 percent will focus on consistently monitored “core beaches.” The 95-percent level “provides a limited allowance for the presence of natural dynamic environmental conditions such as large rain events, which may lead to a temporary spike in bacterial levels in the water,” according to a fact sheet on the issue.

The new target does not change the monitoring program for other beaches, but focusing on core beaches allows for more consistent trend analysis.

Washington Department of Fish and Wildlife monitors a broad range on contaminants in several indicator species found throughout Puget Sound. The 2020 target for “toxics in fish” was based on threshold levels of toxic chemicals known to have adverse effects on Puget Sound herring, English sole, salmon and steelhead as well as screening levels designed to protect human health when consuming such fish. The goal was to get at least 95 percent of the samples to meet these thresholds for PCBs (polychlorinated biphenyls) and PBDEs (polybrominated diphenyl ethers). Other measurements were included for PAHs (polycyclic aromatic hydrocarbons) and endocrine disrupting compounds in English sole and herring.

Considering data from 1989 to 2020, the “toxics in fish” indicator was given a score of “mixed results.” PBDEs and PAHs have been reduced in some areas, whereas PCBs remain a problem, especially near the urban areas of Central and South Puget Sound. PBDEs continue to be a problem for juvenile Chinook in rivers affected by effluent from sewage-treatment plants.

Recent additions to the Vital Sign for “toxics in aquatic life” include the addition of bay mussels to help assess contaminants in shoreline areas. To assess the effects of endocrine disrupting compounds, new measurements focus on the feminization of male English sole and the altered reproductive timing in female English sole.

Specific programs, often supported by state and federal grants, can undertake work to help property and business owners restore habitat, benefit species and improve the food web. By setting targets for the work, the Partnership hopes to accelerate progress toward desired outcomes and improve the Vital Sign indicators. Eleven program targets are listed in the proposed Action Agenda:

Working lands: Protect or improve 4,140 acres of working lands (farms and forests) under the Department of Ecology’s Floodplains by Design program.

Toxic chemical pollution: For businesses, reduce the amount of toxic chemicals used or hazardous waste generated by 8,000 pounds beyond the existing goal of 160,000 pounds, thus reducing costs to businesses by $20,000 above their existing cost-savings estimate of $400,000. This comes under Ecology’s Toxics Reduction Program.

Runoff from working lands: Assist farmers with projects following best management practices to produce a level of outcomes quantified with a “cumulative effectiveness index” by the Washington State Conservation Commission.

Climate adaptation and resilience: Assist with protection or removal of 1,340 homes and other structures subject to flood damage or climate risks under Ecology’s Floodplains by Design program.

When the Puget Sound Partnership was established by the Legislature in 2007, lawmakers codified into law the idea that Puget Sound should be restored to a healthy condition by the year 2020. It was said to be an “aspirational” approach to get things moving. But it soon became clear that no matter what was achieved at any given time, the work of protecting and restoring the ecosystem would never end. As long as people lived here, there would always be changes — good or bad, depending on one’s perspective — and the challenges would go on.

Through the years, as we have come to better understand the meaning of a “healthy” Puget Sound, the challenges seem to keep growing. But much has been achieved, and it is worthwhile to consider what Puget Sound would have been like today without the protection and restoration efforts of the past. Future targets for ecosystem recovery — whether set for the year 2030, 2050 or another year — may still be aspirational. But, while we may regret past failures, we should also take time to celebrate the positive steps toward success.